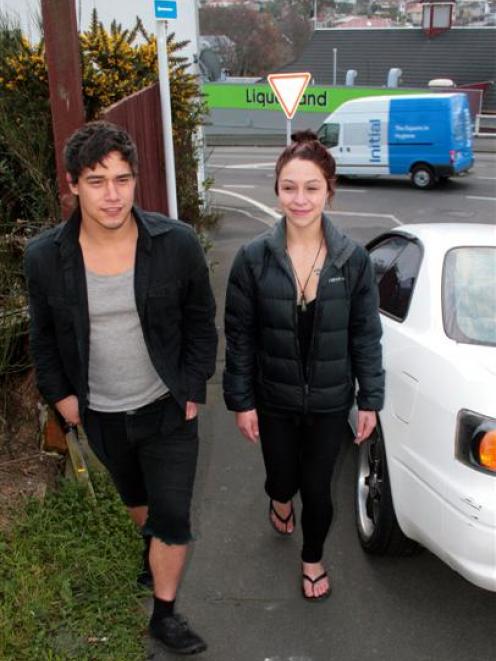 Kotahi Parata and Julia Blair walk past a car legally parked on a designated footpath in Kaikorai Valley. In places where there are no signs saying it is allowed, parking on footpaths will earn a fine. Photo by Dan Hutchinson.
If you park on footpaths or incorrectly on a driveway, a Dunedin City Council crackdown might encourage you to think twice. Tim Miller reports.

It might seem like a timesaver but parking on the footpath could cost you, as the Dunedin City Council cracks down on people using footpaths as parking spaces.

Parking wardens have dished out 237 parking infringement notices for vehicles parked on footpaths in the three months to April, as part of a push to beat a mounting problem.

The fine for parking on the footpath is $40.

In 2007 the council changed the parking bylaw to allow parking on footpaths in 19 of the narrowest streets.

Dunedin City Council parking services team leader Daphne Griffen said the council had started to focus on footpath infringements after an increase in complaints from the public.

''I'm not sure if there has been an increase in people parking on footpaths but it does seem to be very prevalent particularly around the inner-city areas just outside of the paid parking areas and areas in South Dunedin.''

The council did not keep statistics on the number of infringements on specific streets, Ms Griffen said.

Parking wardens would not patrol suburban areas but would respond to complaints from the public, Ms Griffen said.

One area where many people had been caught was in a driveway or a street-side garage.

''People can park in their driveways as long as their vehicle is not on, or overhanging their boundary line on to the footpath.

''It can be something as small as a towbar, but that can still cause issues for people using the footpath.''

Where there was grass berm, vehicles could be parked in a driveway, as long as it did not overhang either the road or the footpath, she said.

Parking on footpaths was a safety issue, especially near blind corners where a vehicle might block the views of road and footpath-users, Ms Griffen said.

''When footpaths are blocked, pedestrians sometimes need to move on to the road to get around, which can be very dangerous on a blind corner.''

Areas where parking on footpaths was allowed were indicated with signs and dotted white lines on the footpath, Ms Griffen said.

The council allowed parking on the footpath in these areas because it meant people could park outside their homes while still letting traffic flow through.

CRACKDOWN ON FOOTPATH PARKERS
• From May 1-June 31 the Dunedin City Council issued 237 parking infringement notices for vehicles parked on footpaths.
• 56 infringement notices were issued in suburban areas and 181 in the central city and CBD area.
• The fine for parking on footpaths is $40.
• Cars parked in driveways need to be completely off footpaths, including towbars.