Crash victim had the 'biggest heart' 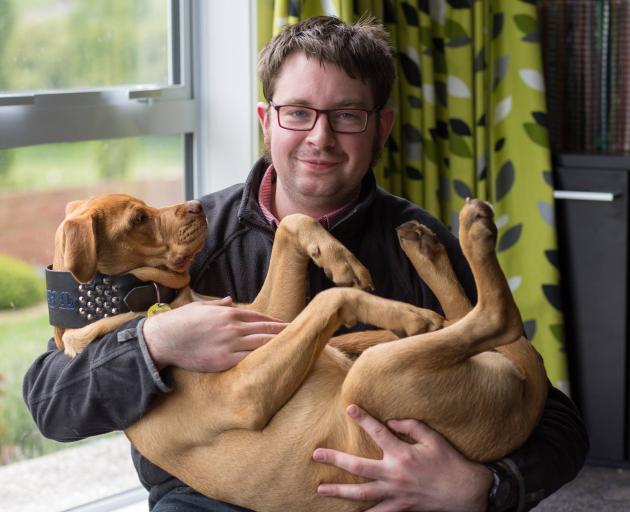 Riley Baker holds dog Tank. PHOTO: SUPPLIED
The motorcyclist who died after a crash in East Otago was a talented and award-winning Dunedin photographer.

Riley Baker (26) was critically injured in a crash with a car on State Highway 1, near the Shag Point turnoff between Palmerston and Moeraki, about 4.30pm on Saturday.

A 41-year-old Chinese national appeared in the Dunedin District Court this morning.

Ma was remanded to reappear on August 23.

Mr Baker's girlfriend, Amy McCarthy (22), said he had the biggest heart of anyone she had ever met.

"He loved everyone and everything, especially animals. He never met an animal that didn't like him.

"We would go to people's houses and be warned about the cat or the dog ... and within 10 minutes he would have it eating out of his hand or zipped up inside his jacket sleeping.''

Mr Baker also had a mischievous side.

"On many occasions he has convinced me it was Friday morning, to the extent that I had got up and got ready for work, before letting me know it was actually Saturday.

"I really should have learnt the first time,'' Ms McCarthy said, laughing.

Mr Baker worked as a service technician at The Laptop Company in Castle St, which was closed out of respect yesterday.

The company's South Island service manager, Maarty Schaap, said Mr Baker was "a massive part of The Laptop Company team and will be very much missed ... We will remember you for a long time to come.''

"He was never flustered.''

"You were the nicest, smartest photographer in our class ... I can't believe you're gone,'' said Kristy Wood.

Josh Norton said he had "lost a great friend''.

"With a wicked sense of humour and an amazing talent for photography, we will miss you.''