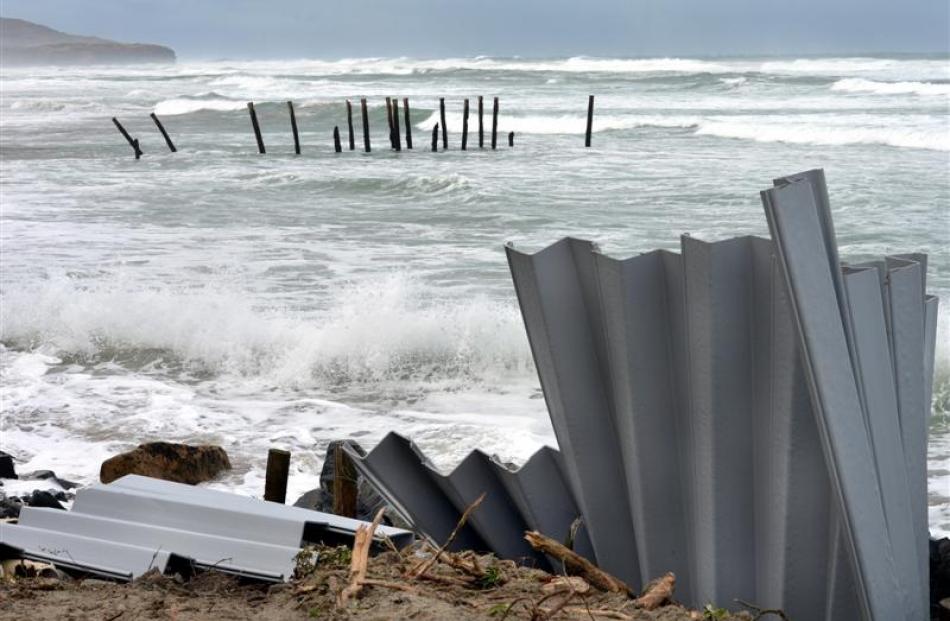 Plastic sheet piling put in place last week has already been bent and broken by the waves at St Clair Beach. Photo by Stephen Jaquiery

Work at Dunedin's St Clair Beach to shore up a temporary boat ramp has succumbed to the waves after a week, but the contractor will pay to fix it.

Fulton Hogan contractors last week installed plastic sheet-piling to the seaward side of the ramp built for the St Clair Surf Life Saving Club in 2013.

The piling was intended to shore up the wall and stop the ramp's rocks rolling into the sea.

It was hoped the boat ramp would provide access for the public and for heavy machinery to repair eroded sand dunes.

But yesterday, the sheets the contractors managed to place were bent and broken.

Work on the ramp is expected to cost between $25,000 and $30,000, but Dunedin City Council transportation projects team leader Gareth Evans said the damage would not come at a cost to the council.

Mr Evans said the contractors were installing the sheet piling and had unfortunately ''got caught out by the high tide''.

He said as the work had not been completed to provide full cover, part of the construction was ''exposed to the sea''.

The piles ''were damaged and will be replaced''.

''They've accepted that didn't work, so they're going to replace those at no cost to us.''

Mr Evans said the work was susceptible to damage from the sea.