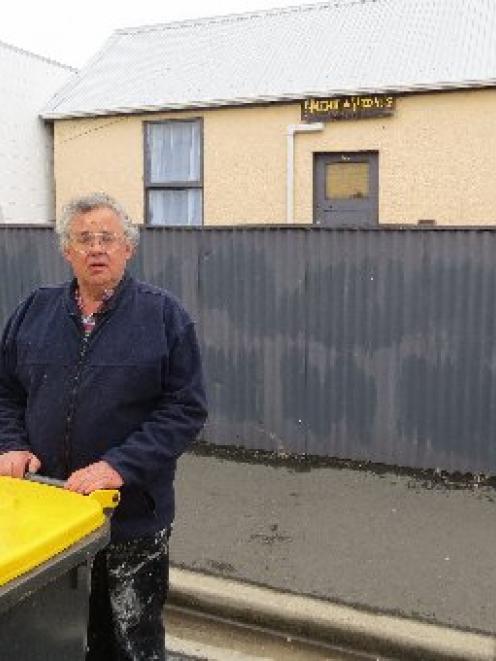 Otago Property Investors Association executive member Cliff Seque is annoyed a member was fined when tenants put out rubbish earlier than the official rubbish day. Photo by Jonathan Chilton-Towle.
The Otago Property Investors Association says the Dunedin City Council has displayed a lack of common sense by fining a member whose tenants put out their rubbish three days before official rubbish collection when they moved out.

The $100 infringement notice for illegal dumping was issued on Friday, January 3, after council staff found rubbish and recycling in front of 57 Grange St.

The rubbish was found three days before the designated rubbish day in the area.

The rubbish was in the correct containers and had been put there by tenants leaving because their lease had expired.

The infringement notice suggested the landlord seek reimbursement from his tenants.

The property owner contacted the council and was invited to send in a letter of explanation, which he did. So far no response has been received.

''This seems pretty unreasonable. The tenants had done everything correctly ... They were leaving town and did not want to leave stinking rubbish in the house.

"The council often collects large items ... and rubbish in non regulation bags from around the university without leaving fines.

"Yet these tenants tried to do the right thing and they are penalised. Where is the common sense?'' he said.

Mr Seque believed the council should have contacted the landlord before issuing the fine and sorted out some kind of compromise. He had never heard of a landlord being fined under these circumstances.

As of yesterday, the fine still stood.

Council solid waste manager Ian Featherston said it was important households did not put their rubbish and recycling out for collection earlier than the night before the scheduled collection, as it could attract pests and present a hazard to footpath users.

'' If householders will not be at home on the day of collection, they should either take their rubbish to the transfer station or arrange for someone to leave it out for them at the appropriate time,'' he said.

''The DCC does not provide a service to collect large furniture items from the kerbside. However, we are obliged under the Litter Act to clear illegally dumped rubbish.

''We work closely with the student community to encourage appropriate waste disposal. Once tenants have vacated properties, we have no way of tracing them.

We are authorised to issue the fine to the owner of the property under The Litter Act 1979, amended 2006.

We strongly encourage landlords to ensure that household waste has been appropriately disposed of as part of their final property inspection when tenants leave and before returning bonds.''

The council had approached the OPIA to speak at its executive meeting about the issue and was awaiting a response.