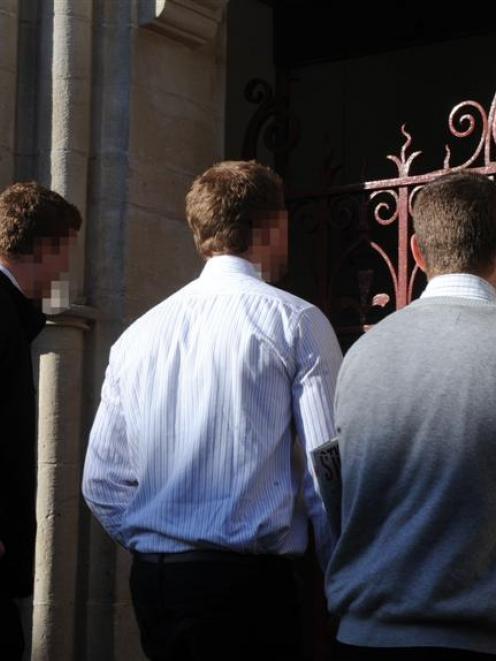 Three men charged following the Undie 500 disorder enter the Dunedin District Court yesterday. Photo by Stephen Jaquiery.
About a dozen well-dressed young men outside the Dunedin courthouse yesterday suddenly became camera-shy as they reported to court for the first time after being arrested during the weekend's Undie 500 disorder.

They were among about 25 men and one woman who turned up at court yesterday following the arrest of 67 at the weekend.

Another 30 or so people will report to court this morning.

At 8.45am yesterday, some waited nervously on the courthouse steps, while others gathered in nearby shop doorways or around the corner, attempting to avoid waiting media.

One man arrived with a jersey over his head, accompanied by a woman who fended off reporters.

When the courthouse doors were opened at 9am, the defendants were eager to get inside, where many of them learned their first appearance in the dock would be delayed.

They were met in the waiting room by duty solicitors who organised adjournments, mainly to October 1, to give lawyers and police time to finalise cases.

They were not the first in court after the weekend.

On Tuesday, two Dunedin men, not students, were convicted and fined for breaching the North Dunedin liquor ban on Saturday; and a 19-year-old Dunedin woman charged with disorderly behaviour in Castle St last Friday, was remanded to September 29.

The most serious charges were disorderly behaviour likely to cause violence and assaulting police with beer cans and bottles.

Of those who were due to appear in court yesterday, only two had occupations listed on their charge sheets - a landscape gardener and a rigger, both from Dunedin.

Most of the accused in court yesterday were from Dunedin, including six residents of Leith St and one from Castle St.

The group included a few people from Christchurch and one each from Taupo, Waimate and Glenavy.