Dunedin's fight to secure a five-star hotel is turning into a race as New Zealand's tourism upsurge catches the eye of international investors. Chris Morris reports.

Dunedin's long wait for a five-star hotel could be coming to an end - and just when the city needs it the most.

Finally, after years of stop-start talks, big visions and crushing disappointments, the city appears close to a deal that would secure a top-end hotel.

And, according to Dunedin Mayor Dave Cull, it couldn't come at a better time for the city as it rides a growing tourism wave.

The Otago Daily Times has been told talks between the Dunedin City Council and developers wanting to build a five-star hotel on the Filleul St car park site, opposite the Town Hall, are close to a conclusion.

While Mr Cull remained tight-lipped about the prospect of a deal, a spokesman for the developers was confident one was only weeks away.

The group has so far declined to reveal itself publicly, and its spokesman has agreed to talk only on condition of anonymity.

But, if confirmed, its project could result in a $90million, 15-storey hotel, run by a top-end international chain, bringing benefits for Dunedin-based construction companies, workers and the economy.

The developers already had a concept and a large team working on the project, which was expected to involve more than 200 hotel rooms, as well as apartments, office space and parking.

But it emerged this week the project was not alone, and the clock appeared to be ticking for the developers in the race to secure a deal.

Mr Cull said when contacted there was now unprecedented interest from other hotel developers and operators eyeing the city.

The council had been fielding ‘‘multiple'' inquiries from developers with five-star projects in mind.

The interest related both to specific sites and to the city generally, although details could not be divulged, he said.

"We're getting more inquiries and interest, from multiple parties, than probably ever in the past.

"Some are certainly talking five-star. There's a recognition ... that there's a gap in the market for a high-quality hotel,'' Mr Cull said.

The renewed interest was a big step forward for a city that has struggled for more than a decade to secure a five-star hotel.

The need to plug the gap in the city's accommodation offering has long been recognised, but projects designed to do so have repeatedly run into problems.

A proposal to convert Dunedin's former chief post office into a five-star Hilton Dunedin foundered in 2008 after the project ran into the global financial crisis.

Plans to convert the former BNZ building in Princes St into a four to five-star hotel, announced in 2006, were also scrapped three years later.

And the failures were followed in 2012 by Betterways Advisory Ltd's audacious plan to built a 27-storey, five-star hotel and apartment tower on the city's waterfront.

The high-rise project sparked a community outcry and was "terminated'' two years later amid acrimonious exchanges between Mr Cull and developer Jing Song.

There has also been stop-start talk of a hotel development on the Otago Regional Council's Birch St site, on the edge of Steamer Basin, although the ORC is yet to decide whether it wants the site for a new headquarters.

In the meantime, other hotel projects have come to fruition, including the four-star Hotel St Clair and the 4.5-star Distinction Dunedin Hotel inside the former chief post office, and more are taking shape.

But according to Mr Cull, the city still needs a five-star hotel to attract wealthier tourists and encourage them to stay longer.

That was particularly important as the city - like the rest of New Zealand - experienced a dramatic upsurge in tourism numbers, and the forecast of more to come.

The study, by New Zealand Trade and Enterprise, Tourism New Zealand and the Ministry of Business, Innovation and Employment, said that equated to 26 new hotels the size of the Sofitel Viaduct in Auckland, over and above projects already planned.

The findings came two years after Tourism Industry Aotearoa in 2014 set a target to grow the value of the visitor market from $27billion a year to $41billion a year by 2025. 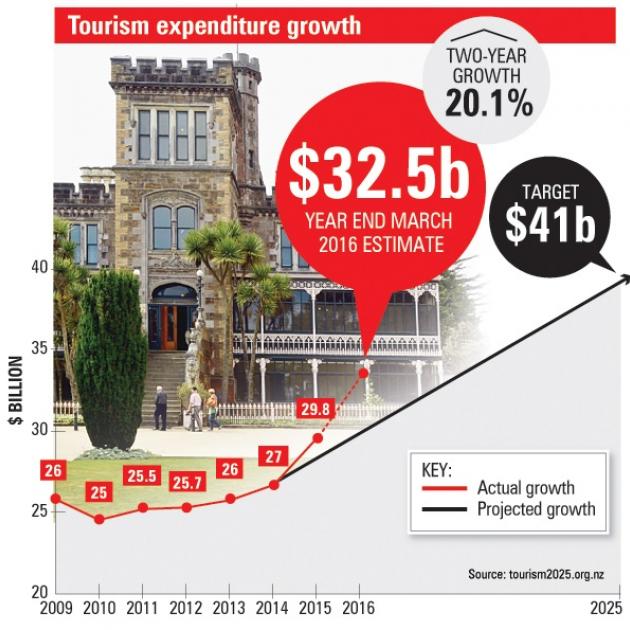 Since then, international arrivals had outstripped projections, jumping 15.6%, to 3.2million a year, and spending was up 20.1% to $32.5billion a year.

That was helped in part by China Southern Airlines' decision to launch regular, direct flights from Guangzhou to Christchurch, bringing 70,000 visitors a year to the South Island.

There was already talk the service could expand, potentially delivering up to 500,000 visitors a year to Christchurch and magnifying the benefits for the entire South Island, including Dunedin. 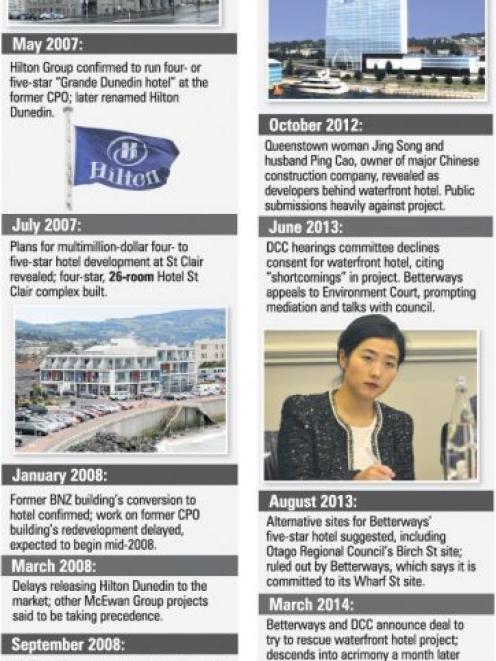 Mr Cull said the growth, and signs it appeared likely to be sustained, was helping convince hotel developers to consider investing.

Already this year, Fu Wah - the Chinese company behind Auckland's five-star Park Hyatt Hotel - was planning another $300 million hotel in the city, as well as eyeing developments in Wellington and Queenstown.

And as attention also turned to Dunedin, such investment could not come at a better time for the city and the South Island, Mr Cull said.

That was because the influx of visitors already under way, and those expected to follow, would place pressure on the environment and experience enjoyed by all.

To combat that, the visitors needed to be spread around the South Island, not concentrated in Queenstown and Christchurch, Mr Cull said.

"There's no way that those main centres are going to be able to cope with the demand that's coming, and retain a high-quality offering.''

Dunedin faced the same challenge and needed to focus on attracting higher-spending tourists rather than just concentrating on bulk visitor numbers, he said.

That kept wages low within a section of the tourism sector, as well as threatening to be "quite negative'' for the visitor experience in Dunedin and other centres, he said.

"You're on a treadmill that's not actually gaining you a lot.''

A five-star hotel would help Dunedin attract wealthier visitors and encourage them to stay longer and spend more, even if they came in fewer numbers, he said.

It would also cater for the city's success in attracting more big events - and the crowds that came with them - and conference delegates making use of the Town Hall's refurbished facilities.

Hotel developers' renewed interest in the city was "a vote of confidence in Dunedin as a destination''.

"We've known that we have a lot to offer. I think the tourism and visitor market has woken up to that.''