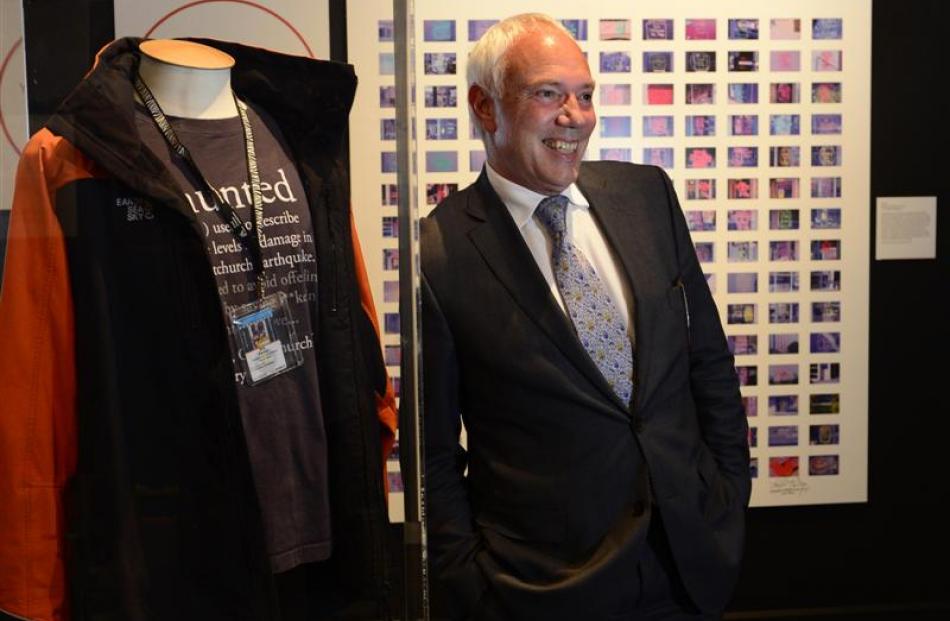 Christchurch Mayor Bob Parker with the orange jacket he was rarely seen without in the days after the February 2011 earthquake in Christchurch. The jacket is part of the 'Canterbury Quakes' exhibition on at the Otago Museum. Photo by Peter McIntosh.

A man who knows what he is talking about yesterday urged communities to be as prepared as they can be for a natural disaster, even though practice routines and rules might seem annoying or silly at the time.

He spoke of the horror of the deaths and damage, the incredible way people were rescued and how ''ordinary folk'' looked after each other in the days after the magnitude 6.3 quake on February 22, 2011.

He said if Dunedin people were particularly concerned about the loss of unstrengthened buildings in an earthquake they needed to empower politicians to put new rules in place.

''When people are told by councils to bring buildings up to standard, people will come up to us and say their buildings have been there for 100 years, mate, and they're still standing, they're fine,'' Mr Parker said.

People were still saying that to him after the Christchurch City Council started enforcing strengthening requirements following the magnitude 7.1 earthquake centred at Darfield in September 2011.

Those very buildings collapsed on February 22, 2011.

Introducing Mr Parker, Dunedin Mayor Dave Cull commented briefly about the value of Dunedin's heritage building stock to the city and the country.

After the quakes, the immediate question was what was Dunedin doing to protect buildings, he said. The council recognised Dunedin's often unreinforced heritage buildings, built on reclaimed land, were at risk of damage in a reasonable earthquake, which was why, among other things, the council had given $500,000 in the past two years to assist with heritage building strengthening costs.

The new building safety regulations likely to flow from the quakes would make some Dunedin heritage buildings less viable, but they might also motivate passive building owners, who had perhaps been neglecting their buildings, to sell to someone who might take more interest in them, he said.

Mr Parker said everybody in Christchurch on the days of the September and February earthquakes went through moments when they thought they would die.

As well as the deaths and injuries, the earthquakes destroyed 14,000 homes and damaged another 60,000. More than 1500 commercial buildings were to be demolished, and about a third of the city's heritage buildings had been demolished or partially demolished.

''These things do happen, not just to other people. They happen to us. As a nation we need to be prepared.