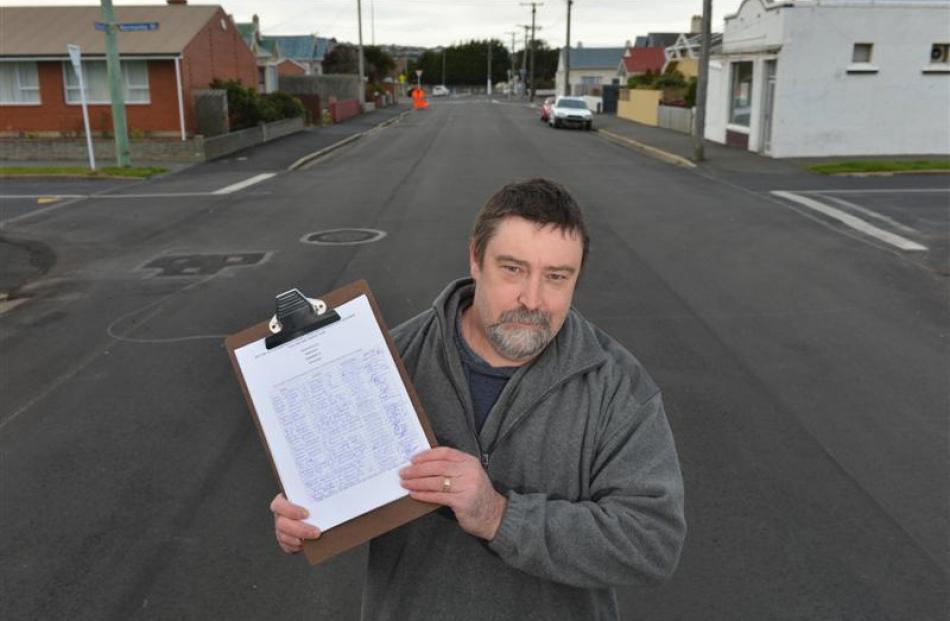 Marlow St resident Trevor McStay has gathered 270 signatures in petition to reopen access to the street from Royal Cres after it was closed to create a safer environment for cyclists. Photo by Peter McIntosh.

Resident backlash against the South Dunedin Cycle Network continues with a 270-signature petition to be presented to the Dunedin City Council urging it to reverse changes made to Marlow St to make it safer for cyclists.

Under the new layout, a two-way intersection at Marlow St and Royal Cres became a one-way exit-only from Marlow St.

The change created a ''quiet street'' and forced people who had used it as a through-route to find new ways to schools and work.

The inconvenience, extra petrol costs from driving the extra four or five blocks required and annoyance at not being consulted before the change prompted Marlow St resident Trevor McStay to start the petition.

''Normally, I'm quite shy and don't say a lot, but this has sort of got my goat,'' Mr Marlow said.

The road was popular for parents bringing children to and from schools in the area, including Musselburgh School, Tahuna Intermediate and Tainui School, as well as Bayfield High School.

People now had to travel along other streets and Ravelston St had become a connector route to Andersons Bay instead, increasing traffic there.

Marlow St, on the other hand, had become what the council desired for it - a quiet street.

That had not brought cyclists to the street so far, he said, and he was not sure any more would come once connecting quiet streets from Tedder St and further west were completed.

''We see more people walking their dogs on the cycle lane than cyclists.''

Mr McStay and his wife collected the signatures at night, including from residents in Marlow, Normanby, Ravelston and Ascot Sts and part of Royal Cres, on Saturdays from users of Culling Park and after school outside Musselburgh, Tahuna Intermediate and Tainui Schools.

Most people they door-knocked were willing to sign the petition, he said.

He would like the council to reverse the changes, but was not sure it would.

She noted when concerns were raised by a Marlow St resident recently, staff offered to visit to explain why the change was made - mainly to improve the safety of cyclists - but that offer was declined.

She said the change was consulted on as part of both the Royal Cres and Marlow St cycle routes.

Mr McStay said the council had consulted those around the intersection, but other residents of the street were not consulted.

He and his wife had been offered a meeting with staff, but declined because they felt they had made it clear enough what they wanted, he said.

''We don't mind the cycleway. We just want the intersection back to two-way.''