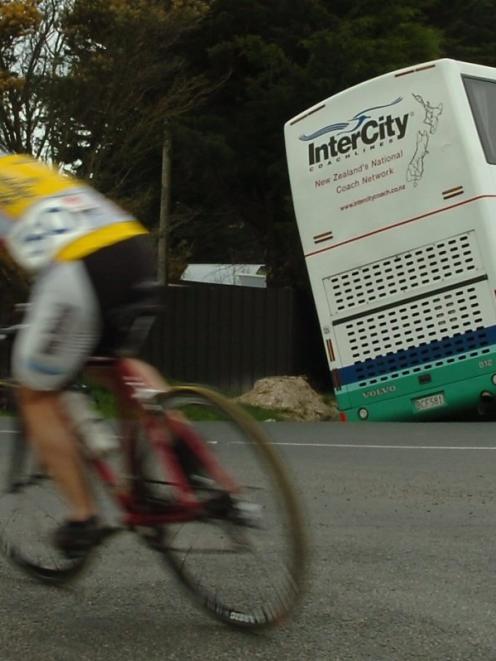 Cyclists competing in the Otago junior cycling championships pass an Intercity bus which slipped into a drain on Saturday on the corner of Henley Rd and Centre Rd. Photo by Peter McIntosh.
About 20 bus passengers travelling between Christchurch and Te Anau had an unscheduled stop on Saturday, when their bus slid into a roadside drain and came to rest at a precarious angle.

The double-decker bus moved left to avoid marker cones laid out to control traffic on the Otago junior cycling championships circuit at a right-angle corner of Henley Rd and Centre Rd.

The rear wheels of the bus left the seal and the vehicle slid into a roadside water channel just before 4pm.

Tiffany Buchanan (17), of Dunedin, was on the bus's top level when it tilted over.

"I'm scared of heights, so it wasn't great, but it probably looks worse than it felt," she said.

Sheri McConnell (18), of Christchurch, said passengers remained calm as the bus went into the ditch.

"I didn't really know if we should move off the bus or not, so I just sat really still."

A Dunedin man who identified himself as "Mr Clegg", said he was "doing his first and last day as a marshal at a bike race".

"I stopped the bus for cyclists to come through. I think it was a combination of poor roads - the corner has a really bad camber - a driver in a hurry and bad luck. A bus came through a minute earlier and it got around OK."

Dunedin Intercity manager Malcolm Budd said he believed the placement of the cones made it difficult for the bus to negotiate the corner. Mr Budd said a sheep truck trailer was stuck in a ditch in the area recently and a local resident said a milk tanker trailer went into the same ditch in recent weeks.

"That bus and driver go to airport and then over that road virtually every day, so it's not as if the driver did not know the area," Mr Budd said.

Passengers were transferred to another coach after about an hour. The company would investigate the incident, he said. A small crane righted the bus on Saturday.