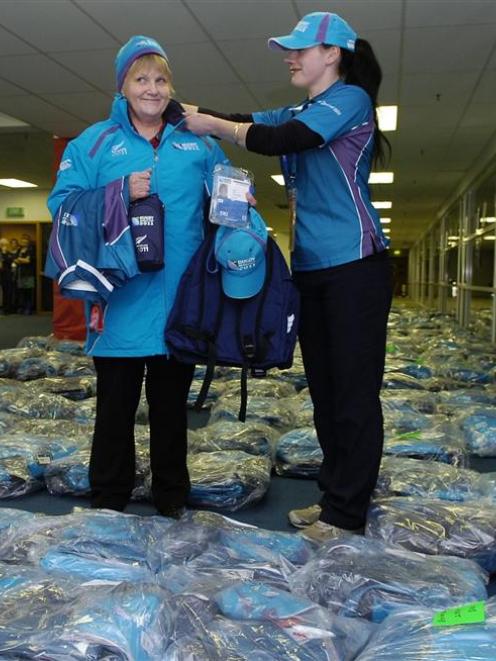 Volunteer VIP driver Sue Lee, of Waikouaiti, is fitted with her Rugby World Cup volunteer's uniform at Carisbrook yesterday by Rugby World Cup host workforce manager Kelly Taylor. Photo by Jane Dawber.
Ever since her days playing prop for the Eastern women's rugby team in Waikouaiti, Sue Lee has had aspirations of being on the field at a Rugby World Cup.

She hasn't played since the 1980s, so she won't be getting that close to the action this time.

But Mrs Lee is confident she will get pretty close to some high profile managers of national, provincial and club rugby teams from overseas at the 2011 RWC in New Zealand.

She will be a World Cup driver, taking VIPs to and from hotels and games during the 2011 Rugby World Cup in Dunedin.

Normally, Mrs Lee is a blood donor nurse for the New Zealand Blood Service. But come September 10, she will become one of more than 400 volunteers who will be the friendly face of the tournament in Dunedin, getting back nothing more than pride and a passion for the game, along with the odd match ticket and the right to keep the uniform.

"I just want to be a part of it. I've grown up with rugby. I'm heavily involved with local club rugby. It's always been a big part of my life,"she said.

Volunteers from all walks of life will be providing services including ushering, monitoring spectator numbers, catering, security, providing tourist information, driving, communications and administration during the event.

In a bid to make them instantly recognisable, all the Dunedin volunteers were issued with a uniform at Carisbrook yesterday.

The uniform includes brightly coloured hats and tops. Volunteers needed to be seen "a mile away", Mrs Lee said.

While there were no tickets to the Rugby World Cup final in their pack, volunteers did receive four free tickets to one match and will attend a special "thank you" mayoral morning tea after the tournament.