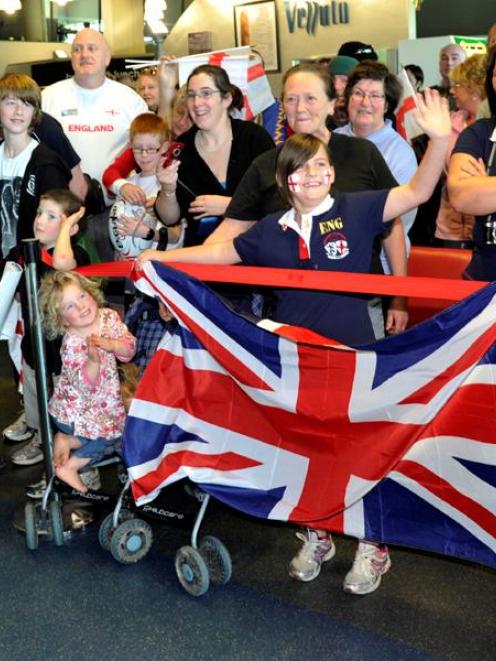 The team was greeted by about 200 white jersey-wearing and flag-waving supporters when it touched down at Dunedin International Airport yesterday afternoon, after flying into Auckland mid-week.

Star first-five Jonny Wilkinson told the Otago Daily Times it was "awesome" to be in Dunedin ahead of their first tournament match on Saturday, while coach Martin Johnson was impressed by the welcome.

"It's great - nice. You don't normally get this when you're touring New Zealand."

Among the fans there to greet them, and hunt for autographs and photos, were Kevin and Linda Prentice, of Cambridgeshire, in England.

The pair arrived in New Zealand only yesterday after travelling from England, via Hong Kong, for the tournament, and to see their Dunedin-based sister.

They had tickets to every match their team hoped to play - including the quarterfinal, semifinal and final.

However, Mr Prentice was less sure of his support for the black alternative strip the England team would wear when playing Argentina at Otago Stadium on Saturday.

"It's ridiculous - stupid," he said of the decision to change to the All Blacks' traditional colour.

"It should be white and red."

He blamed team sponsor Nike for the decision, which prompted raised eyebrows in New Zealand and had also not gone down well in England, he said.

Johnson, England's Rugby World Cup-winning captain-turned-coach, was non-committal when asked how he thought the jersey would be received in Dunedin.

"What, our black jersey? I dunno. It's a jersey, mate. We'll see. We're looking forward to the game."

Despite the controversy, Mrs Prentice said she was confident her team could take away the Webb Ellis Cup for a second time.

"We're going all the way.

"We are going to see England win."