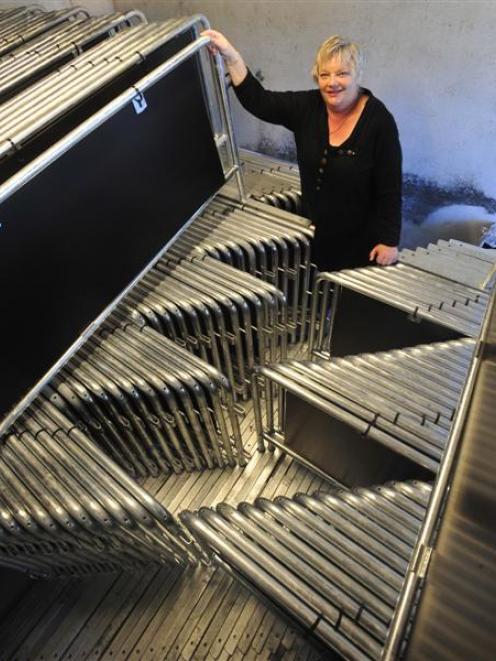 Dunedin City Council events team leader Marilyn Anderson with a batch of new barrier fences which will be used in the lower Octagon around Rugby World Cup match days. Photo by Craig Baxter.
Fancy new barriers will provide a smart appearance to the lower Octagon around Rugby World Cup matches, and make it clear where the temporary liquor ban applies, says the Dunedin City Council.

The fencing, the $48,000 cost of which was justified by the fact it would be used for other events, and was to be hired by bars, arrived in the city over the past few days and would provide a uniform and professional look to the divisions between licensed premises during the Rugby World Cup, Dunedin City Council events team leader Marilyn Anderson said.

The day before each match until the morning after, lower Octagon bars, and some in the vicinity of Edinburgh Way, in George St, as well as other businesses in the area, would be extending their businesses into the streets, their areas delineated by the barriers.

A gap at least 4.5m wide would be left on the street to allow the largest emergency response vehicle to get through, should it be needed. The extended premises allowed larger groups of visitors to celebrate before and after the event and worked with the liquor ban, which had been extended for the Rugby World Cup.

Dunedin police area tactical response manager Inspector Alastair Dickie said the ban, covering the area from Rattray St in the south to Bank St in the north, and Queen St in the west to the harbour in the east, would be in place from Friday morning until October 3.

Police would focus particularly on those carrying opened alcohol containers, but also unopened containers where people look drunk or appear likely to become disorderly, or where it was thought they might consume the contents within the liquor ban area.

"Anyone coming to our attention for any of these reasons could well be arrested ... we need to take a firm line with those who cause us difficulty in terms of alcohol usage."