A Dunedin artist who creates strong female characters is delighted to be recognised by an international film festival.

Artist and lecturer at the Dunedin School of Art Kiri Mitchell said her stop-motion animation - Turf - was shortlisted for best animation at the Women Over 50 Film Festival, winning bronze in the animation category.

The annual event in the UK celebrates international films by and about older women. 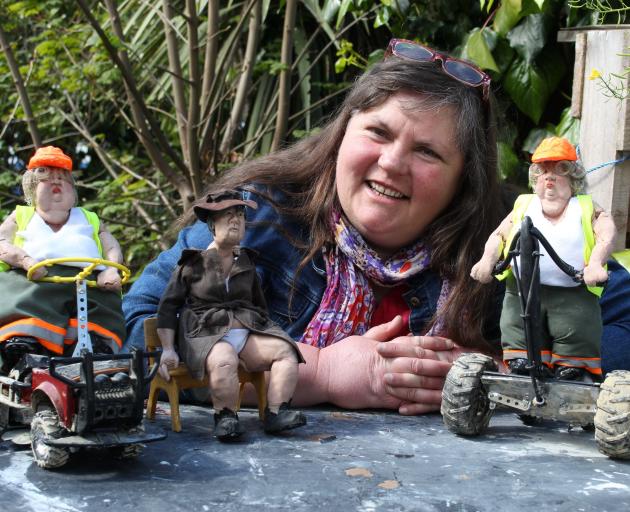 Mitchell said Turf told the story of Pat, a mature lady who lived under a small glass dome.

But her space gets intruded upon by a series of female characters who operate ride-on lawn mowers.

‘‘It is a lovely play on mature women knowing who they are, understanding their space, being incredibly capable.’’

One of the aims of her short films was to explore powerful representations of older women.

‘‘Pat in particular, I have created her so that she is quite pear-shaped, with strong sturdy thighs.’’

She aimed to present archetypes of women but not the stereotypical ‘‘bouncy female’’.

Her stop-motion films were not childlike whimsy, instead exploring adult themes.

‘‘There is a freedom in stop-motion where you can do quite perverse things.’’

She examined sexual politics and the ‘‘clean and proper body’’ - how women’s bodies were shaved and altered before they were deemed suitable for society.

‘‘Part of my joy with my characters is that they are unapologetically ordinary. They are not actually trying to achieve any status of beauty.’’

Men were likely to feel more comfortable in their body, but for women it could be harder to achieve, Mitchell said.

‘‘In my films I suppose what I am trying to demonstrate is that there is peace to be found in just being.’’

The film will be screened as part of the ‘‘Configured’’ exhibition at the Ashburton Art Gallery, which opens on November 7.