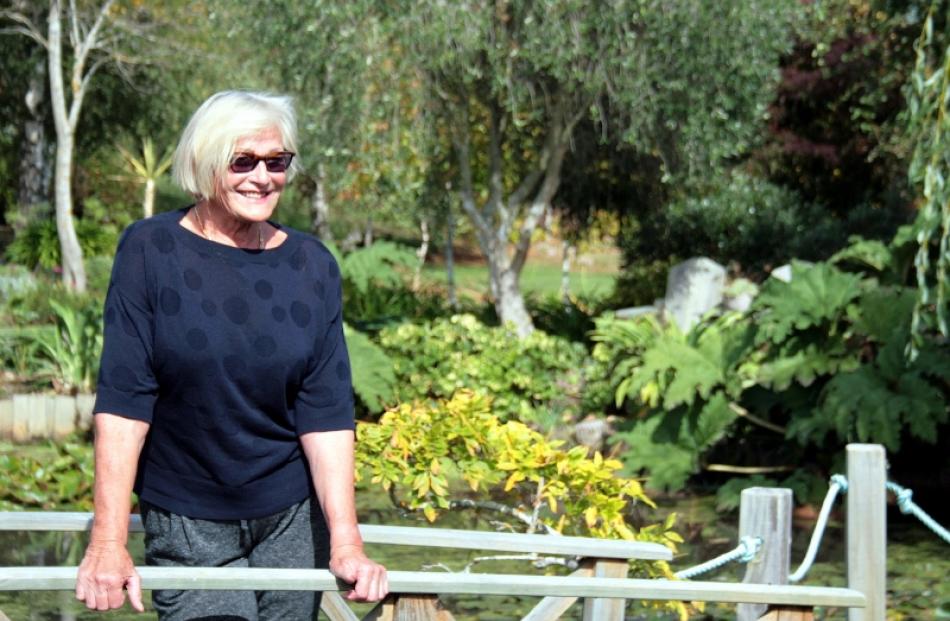 Trudi Stewart relaxes at home, at Northview Gardens, which was recently awarded a three-star rating by the New Zealand Gardens Trust. Photo by Dan Hutchinson

Dunedin is well placed to claim the crown of New Zealand's premier garden city but could be hiding its light under a bushel.

Dunedin Open Gardens Association president David Stewart said Dunedin had just as many, if not more, beautiful gardens than anywhere else in New Zealand.

He said Dunedin needed to concentrate more on promoting itself and he was disappointed initiatives such as garden tours for cruise ship visitors, the Rhododendron Festival and council funding for an open gardens brochure had ''gone by the wayside''.

''There is a big group of people who like to do that sort of thing [garden tours] - quite a well-off group, too.''

Dunedin City Council business development adviser Sophie Barker said it was ''unfortunate'' the council had not been able to fund the brochure this year.

She said it was important the various open gardens worked together to create a ''product'' that could be sold to tourists.

In the past they had created a $30 package, sold through the i-Site, that allowed tourists to visit several gardens and that had been very popular.

She said there were some ''incredible'' statistics when it came to gardens and tourists. One interesting fact was that 71% of Chinese tourists visited a garden while in New Zealand.

Marketing Dunedin as the garden city was difficult because Christchurch already had that as its tag line, Ms Barker said.

It was fair to say ''we probably are quiet achievers and the quality of gardens here are as high as anywhere in New Zealand'', he said.

Council parks and recreation services manager Mick Reece said his brief when he started 30 years ago was that the city wanted its botanic garden to be the best in the country.

''What I learned pretty quickly when I came here 30 years ago is that there is a real wealth of talent and community support behind gardening and horticulture.''

He said the feedback from visitors was that the city's gardens were ''pretty highly regarded'' at both a national and an international level.

It is promising to be a big year for gardens in Dunedin. It is the botanic garden's 150th anniversary and the city will host the New Zealand Gardens Trust annual conference this weekend and the International Botanic Gardens Congress later this year.