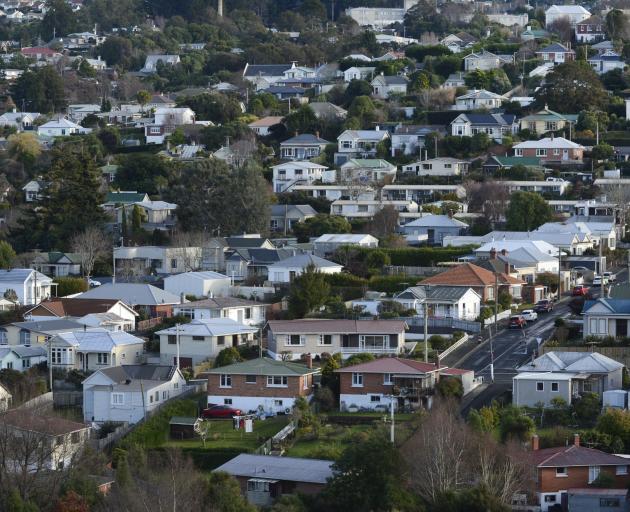 The average capital value of Dunedin homes has increased 39.1% since the last ratings in 2016. Photo: Gerard O'Brien
The prices of Pine Hill, Mornington and Caversham households have soared in Dunedin's new three-yearly valuations.

Quotable Value valuations for the Dunedin City Council area will arrive in letterboxes over the next week and most are now available online.

The average capital value of Dunedin homes has increased 39.1% since the last ratings in 2016.

Across all sectors there was a 30.4% increase in capital value and a 49.1% rise in land value.

For Dunedin houses the biggest capital value movements by suburb were Pine Hill and lower Mornington-Caversham (up 54%), Brockville (52.3%) and Corstorphine (50.7%).

One of the lowest increases was in the "central city north" area, although this still increased by 23%.

Council finance and commercial general manager Dave Tombs said how much individual rates would increase by was complicated.

However, "everything being equal" if capital values for a household increased in the last three years more than the city average, it would result in a higher rates increase.

Property owners and occupiers can object to revised valuations by writing to Quotable Value by December 18.

Commercial property increased by 20%, while the industrial sector rose 24.2%.

Land values increased overall by 29% for commercial and 49.5% for industrial.

There were 56,027 rateable properties at the time of the revaluation.

The total rateable value of those properties is $33.5billion, with the land value now at $15.1billion.

"Lifestyle has followed the residential demand with strong growth. The capital value of the average lifestyle property has increased by 31.1% to $747,000, with a corresponding average land value rise of 40.4%."

The rural market was comparatively subdued.

The average dairy property increased by 2.1% and pastoral was up by 7.6%.

This article is actually incorrect
Many property RVs remaining the same in Mosgiel, and two bed units still at $160,000 in areas such as South Dunedin. I dont think!

Agreed, the main culprits are low interest rates which allows us to borrow larger and larger amounts, and immigration into NZ. Are we willing to go back to high interest rates and low inwards immigration? I would be happy but the government wants a positive GDP rate, even if it is close to zero when adjusted on a per capita basis (ps, that means we are not getting richer, but more crowded).

GV are up.... but so will the rates that the owners pay/ this is only good if the intention is to sell / if you want to keep the house. the costs will be higher