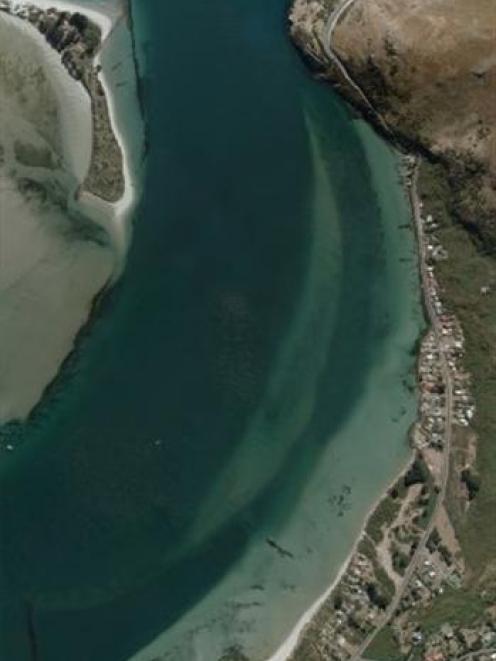 Te Rauone, near the mouth of Otago Harbour. Photo: Supplied.
It is back to the drawing board for a plan on how best to address Te Rauone's erosion issues after Dunedin City councillors considering improvements to the reserve, and whether to invest in a breakwater rock wall to protect it and private properties against further erosion, resolved instead to discuss the issue further with affected parties.

Councillors considering what involvement the council might have in managing erosion at Te Rauone in Otago Harbour said they did not have enough information and the matter was confused by the split among submitters to the annual and long-term budget-setting process, who focused either on the reserve upgrade or the breakwater installation.

Councillors were considering whether to fund the $160,000 installation of a breakwater proposed and designed by Port Otago, of which the council would take ownership, or vote for a council staff suggestion to instead reinstate a suspended coastal dune conservation works programme at a cost of $90,000 over the next 10 years.

During a robust discussion among councillors, arguments swung between those who believed there was a moral obligation to get something done for Te Rauone residents after 20 years discussing the matter, and those who believed more information was needed before council embarked on a project that would essentially protect private properties, which was against council policy and might set an unwanted precedent.

Councillors had many questions about the financial implications and effectiveness of the breakwater, as well as what other erosion management work might be needed.

Council general manager operations Tony Avery said investing in the wall would be a departure from policy, which was not to protect private property, only council-owned reserves.

He agreed erosion management work at Ocean Beach and Middle Beach was related to the potential impact on the large mass of South Dunedin properties behind the reserves, but those reserves were part of a coastal defence mechanism.

Cr Paul Hudson said after 20 years of there being an issue, the council had a moral obligation to do as much as it could to help residents of Te Rauone.

Mr Avery said if such work was approved, many communities in other low-lying areas around Dunedin could potentially come to the council also seeking some sort of protection. There was significant risk in setting such a precedent, he said.

Cr Stevenson said she was also concerned about liability if it the breakwater did not work.

Cr Bill Acklin wanted the work to be done while the council had Port Otago's support.

Others, including Crs Lee Vandervis and Richard Thomson, questioned Port Otago's motives and while Cr Kate Wilson said she thought the port's intentions were sincere, she agreed more information was needed.

"There is no need to rush in to an immediate decision on this one."

Cr MacTavish also said she struggled with taking the council into new territory in terms of precedent and would be less nervous if there were more discussions around that and the potential implications of a breakwater scenario on future budgets.

Cr Cull questioned if a policy around erosion protection of private property could be developed to move things forward, but Cr Richard Thomson said the council would tie itself in knots trying to create a policy like that, as it would always come down to changing things for individuals.

Cr Andrew Noone summed up the situation by saying: "There is a general willingness to resolve the issue, but there are too many unknowns."

Councillors decided not to fund anything in the draft long-term budget, and resolved to ask the Otago Peninsula Community Board to organise a meeting with the Te Rauone Coastal Care committee and the chairmen of the council's community development, planning and environment and infrastructure services committees to search for and discuss potential solutions and funding options for them.

The Otago Regional Council and Port Otago should also be invited to attend the meeting.