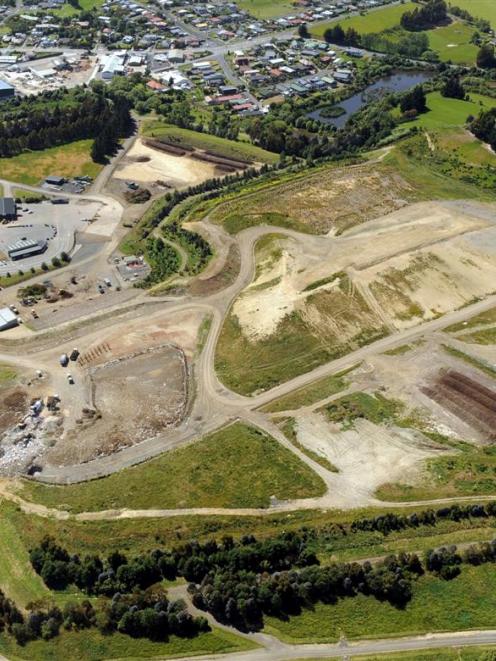 The Green Island landfill site where users will pay increased charges from March. Photo by Stephen Jaquiery.
Dunedin city councillors have agreed to increase landfill user charges in March without public consultation, in order to recover about $80,000 in costs all ratepayers would otherwise have to carry.

Council staff sought approval from councillors at the pre-draft annual plan meeting yesterday to increase landfill user charges in March and again in July, that time through the annual plan process.

The request followed a review that found the cost of disposing of waste from the city's landfills was about $195,000 a year more than was recovered in user charges.

Councillors generally agreed fees needed to be increased to meet the cost of running the landfill, but found it difficult to agree on whether the increase should be staged; to start in March as recommended by staff, which would mean effectively going ahead without consulting the public, and then increase again in July, or increase them once in July as part of the 2013-14 annual plan and carry a $195,000 loss this financial year.

Cr Andrew Noone proposed that only one increase be made, in July, and the council accept it was behind in terms of revenue, because the community should be given an chance through the annual plan process to respond to the suggested increase.

Also, every time the council considered increasing these charges there was a negative impact and leaving the increase to July would give staff time to deal with the potential of people taking to illegal dumping to avoid paying the increased fees.

Cr Colin Weatherall agreed, but deputy mayor Chris Staynes supported a March increase, because it would at least mean some costs were being recovered, reducing, if only for three months, the effective council subsidy of landfill use charges.

Cr John Bezett said the council should be explaining the changes in the draft annual plan and giving people a chance to understand before increasing fees, but Cr Teresa Stevenson moved councillors ''bit the bullet'' and vote for the March increase.

Cr Richard Thompson said he would support that if it excluded the proposed replacement of per-bag charges with per-vehicle charges.

In making a partial fee increase in March, Cr Staynes said, the council was at least correcting the problem partially and would be better off for it.

It that was not done, the revenue lost between March and July alone would have a flow on effect for the 2013-14 budget.

Cr Jinty MacTavish said it would be lax of councillors not to take the opportunity to do something about it when staff had identified a way to recover costs at an earlier stage.

In other changes to fees and charges, changes to trade waste fees, swimming pool entry fees and metered water charges were approved for inclusion in the draft 2013-14 annual plan.

Water and waste services manager Dr Laura McElhone said the trade waste changes reflected the relative changes in the cost of treating waste flow and load due to the imminent completion of the Tahuna treatment plant and the gas to energy project at the Green Island treatment plant.

Swimming fee changes are proposed to make them more consistent, and increase metered water fees to reflect inflation and capital costs, rather than depreciation. The latter should result in a general charge increase of about 5.26% to the council's metered water clients.