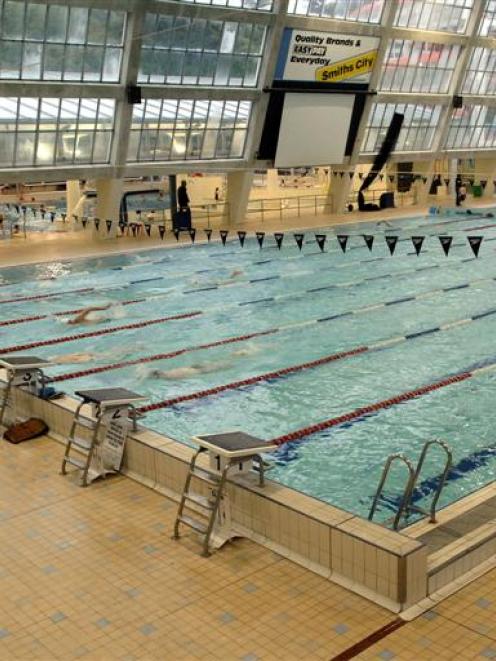 The future of Dunedin's pool facilities was the subject of scrutiny and tense debate yesterday. Photo by Linda Robertson.
Plans for a new pool at Mosgiel - or improvements to Dunedin's existing Moana Pool - need to be progressed more quickly, a Dunedin city councillor says.

The plea from Cr Bill Acklin came as councillors considered a staff report detailing the likely cost of four options to improve the city's aquatic facilities.

The report showed the estimated cost of a new swimming complex at Mosgiel had risen by more than 50%, from $11.5 million to $18 million, since a report by the council's aquatic services working party last year.

The latest figures came after a review of the working party's work and prompted at-times terse debate at yesterday's 2013-14 budget meeting.

Mosgiel Taieri Community Board chairman Bill Feather, speaking early yesterday, urged the council to do more to give ''strong direction'' to the Mosgiel community by finalising plans in the coming budget.

Cr Acklin - a member of the aquatic services working party - agreed, saying the council had ''taken the foot off the throttle with this'' and needed to do more, sooner.

The staff report recommended finalising pool plans in time for the next long-term plan budget meeting in 2015.

Cr Acklin believed that was too long to wait.

''There needs to be some sort of positive steer from the council, not just for the Mosgiel community, but for the community at large . . . about how we are going to go about improving our aquatic facilities.''

The council staff report also detailed the revised cost of three other pool options for Mosgiel, and a revised upgrade plan for Moana Pool, which saw the cost drop from $13.2 million to $3.9 million.

However, Cr Syd Brown questioned why the consultant, SGL, used in the original review of the city's pool facilities had not been asked to review the latest report's findings.

''I'm uncomfortable that we have a consultant and we have cut them off.''

Mr Prescott said it was felt not to be necessary, and council operations general manager Tony Avery said they had not provided any analysis of costs originally anyway.

The detailed review of costs was new information offered by council staff, and focused only on a slice of the wider review undertaken originally by SGL, Mr Avery said.

It was also worth noting the council's working party had not met for a year, since issuing its report, and so had not had an opportunity to consider the report reviewing their findings, he said.

Cr Acklin said the report's findings had come as a ''huge surprise'' to working party members, and questioned the reliability of the review's estimates of how many people were likely to use the different pool options.

Mr Avery said the numbers could be debated, but were considered conservative.

Debate also turned to re-establishing the working party to consider the review's findings, but grew tense when Cr Teresa Stevenson suggested the membership was ''quite heavily weighted'' in favour of ''people with a Mosgiel connection''.

Cr Colin Weatherall - who lives in Brighton and was the working party's chairman - rejected that, saying ''I thought we were all city councillors'', as did Cr Acklin.

Cr Stevenson tried to reply but was called to order by Mayor Dave Cull.

Councillors voted to re-establish the working party to consider the review's findings, with the terms of reference and membership to be determined at the next meeting of the council's community development committee.