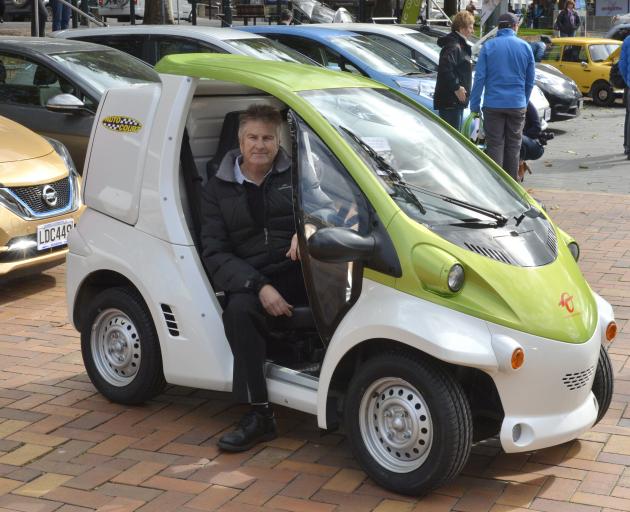 Car salesman Ivan Webster displays a Toyota Coms electric vehicle in the Octagon yesterday.
A fleet of electric vehicles has visited Dunedin in a show of power for the industry, and amid signs of the rapidly growing popularity of this form of transport.

About 25 electric cars were on display in the lower Octagon yesterday, including six vehicles which had stopped in the city during the fourth annual "Leading the Charge" national road trip from Bluff to Cape Reinga.

This trip aims to raise awareness about electric vehicles, including about their growing operating range and environmental benefits. The Dunedin event was hosted by the Otago Electric Vehicle Society.

The trip is being run in association with the Better NZ Trust, and Leading the Charge, the latter a group of electric vehicle enthusiasts.

The visiting vehicles include three Teslas and a Hyundai Ionique, which range in value from about $60,000 to $120,000.

When she became involved in the road trip's Octagon hosting event in 2016, 21 of the 28 electric vehicles based in Dunedin were on display.

But this year, more than 400 fully electric vehicles were based in the city.

"It's a very dramatic increase," she said.

This Tesla electric vehicle was among about 25 electric vehicles on display in the Octagon yesterday. Photos: Gerard O'Brien
Other positive developments included the continuing roll-out of more charging points for electric vehicles, including through collaborative efforts by ChargeNet in Otago, and the growing operating range of newer electrical vehicles, in some cases up to 200km.

Many of the Dunedin-based vehicles displayed yesterday ranged in value from $12,000 for a second-hand Nissan Leaf to about $60,000 for a Hyundai.

One unusual highlight was a Toyota Coms electric vehicle that is used as a ride-share vehicle in Tokyo.

The vehicle could not be driven on New Zealand roads under current regulations. He had imported it to raise awareness of the potential of such small vehicles.

The vehicles were left in ride-share parks in Tokyo, and, with keyless electronic shared access, could be used by a wide variety of users for short trips, including for shopping, and returned either to the same ride-share parking area or to another.

Three of the small vehicles would fit into a single standard-sized car park, a point which further highlighted their flexibility and attractiveness.