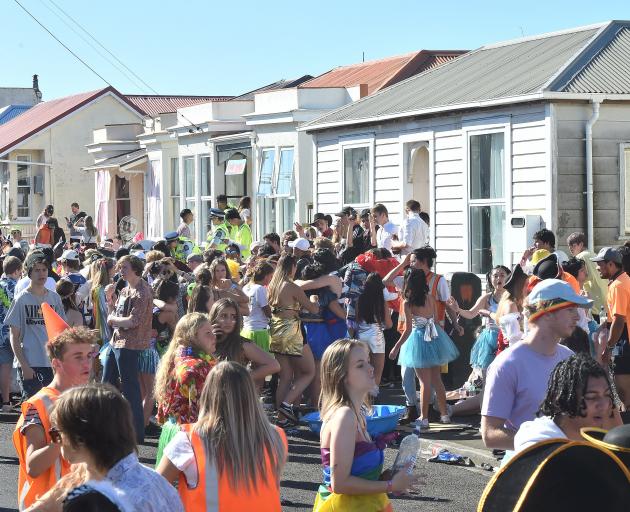 Revellers enjoy the Hyde St party in a previous year. PHOTO: GREGOR RICHARDSON
As cancellations mount around the South, some events are still going ahead - for now.

Prime Minister Jacinda Ardern announced this week that gatherings of more than 500 people should be scrapped, and the Dunedin City Council said it would not hold events of more than 100 people to help combat the threat of Covid-19.

Big events on the southern calendar, including Warbirds Over Wanaka, the Hyde St Keg Party, the Dunedin Heritage Awards and Relay For Life have all been canned.

Anzac Day services would be reviewed as Ministry of Health advice was released.

Students have been urged not to get together and celebrate St Patrick’s Day today.

University of Otago head of student health Margaret Perley said the outbreak was "serious and unprecedented, and we respectfully ask students to help us with this".

"Overloading the public health system with drinking-related cases in the emergency department and at Dunedin doctors’ rooms following student celebrations such as St Patrick ’s Day will only exacerbate and prevent what the health workforce is now preparing for.

"We are appealing to students’ sense of social responsibility here."

The message comes as the city also deals with a mumps outbreak, with eight cases confirmed.

Dunedin bars were planning to go ahead with St Patrick’s Day celebrations.

The Craic Irish Tavern owner Claire Grenfell said its St Patrick's Day festivities, including live music, had been planned for "some time".

"We are operating business as usual, just with extra responsibility."

The Otago University Students’ Association announced it was cancelling the April 4 Hyde St party, usually attended by thousands of students.

Nasa has cancelled its planned launch from Wanaka Airport of a super pressure balloon next month.

"One of the best means for being protective of its workforce is to practice social distancing.''

Nasa had already limited all international travel to only that which is "mission critical''.

In a statement posted on the event's Facebook page, the Cancer Society said it had decided to postpone Relay For Life events scheduled between yesterday and April 6 over Covid-19 concerns.

Queenstown Winter Festival director Harald Ulriksen said, at present, preparations were continuing for the 2020 festival, being held between June 18 and 21, to go ahead as planned.

"We'll just have to assess that on a day-by-day basis, but we've got all of our plans in place [and] we're taking our lead from whatever the Ministry of Health is suggesting."

"We are appealing to students’ sense of social responsibility here."

Students- "Overloading the public health system with drinking-related cases in the emergency department and at Dunedin doctors’ rooms following student celebrations such as St Patrick ’s Day will only exacerbate and prevent what the health workforce is now preparing for.
"We are appealing to students’ sense of social responsibility here.".
Well that didn't work. Time for the university to take strong action like the rest of society-to save lives.