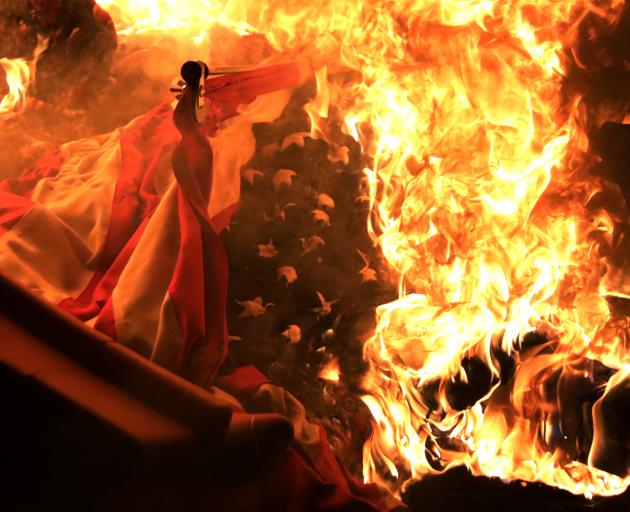 A US flag burns during a protest near the White House in response to the killing of George Floyd in Minneapolis. Photo: Getty Images
Explosions, the hazy orange glow of burning buildings, and nightly curfews.

That has been the reality for a former Southland woman living at the heart of protests sparked by the death of African-American man George Floyd in the United States last week.

Her home is about 1.6km from where Mr Floyd was killed by a white police officer who knelt on his neck.

Days of protests and riots, some violent, followed across the United States.

"Friday night was the worst night. I heard explosions, there was a helicopter overhead, I saw an orange glow and there was smoke everywhere," she said.

"Saturday night was better. The Minneapolis Police, State Patrol and National Guard were more evident and the protesters and law enforcement moved towards downtown and away from us."

A curfew was in place at 8 o’clock each night, she said.

"It is sad because people have been inside all winter and then for the last 10 weeks they have been locked down and so many people have no money or jobs and they are desperate."

Miss Bean was concerned about her safety, saying, "I have spent 15 years in this city and I have never been worried about taking the dog for a walk at night, but on Friday we stayed home."

Concerns had been raised about other incidents involving police officers killing African-American men in the area in the past.

"There are some really bad cops in Minneapolis," Miss Bean said, although she she believed the city’s police chief, Medaria Arradondo, was a "decent man".

"He said yesterday the next generation of officers are being trained differently when it comes to interacting with African-American men."