By Grant Miller
4 Comments
"Black lives matter" and "I can’t breathe" signs were in abundance in Dunedin’s Octagon yesterday, as hundreds of people showed their solidarity with protesters in the United States.

"Good night, alt-right" read another. Others expressed a lack of comfort with what protesters saw as white people’s reticence about violence inflicted on people of colour.

Dunedin’s protest was one of a series in New Zealand yesterday that followed last week’s death of African-American man George Floyd in Minneapolis when he was being arrested.

A wave of protests and riots erupted in the US after video emerged of police officer Derek Chauvin kneeling on Mr Floyd’s neck. Mr Floyd could be heard telling the officer "I can’t breathe", before losing consciousness.

Chauvin has since been charged with third-degree murder and manslaughter. He and three other officers were fired. 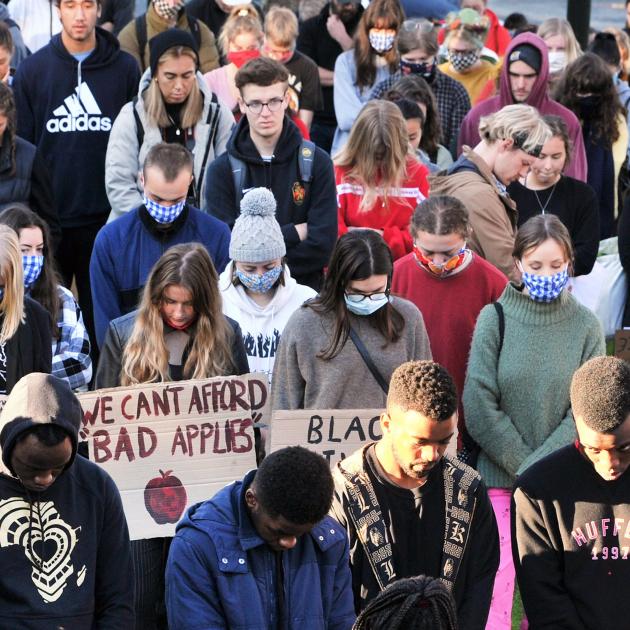 People stood in unity against racism. Others spoke out against colonisation and some warned they were unhappy about a trial of New Zealand police teams carrying firearms.

Otago Polytechnic nursing student Kate Mihaere was clear about why she was there.

"We all need to take a stand against hatred and racism," she said.

"It doesn’t surprise me there are so many people here."

Aiden Fox, a science graduate from the University of Otago, is from Washington DC.

He was worried about the "militarised" police force in the US failing to protect people. 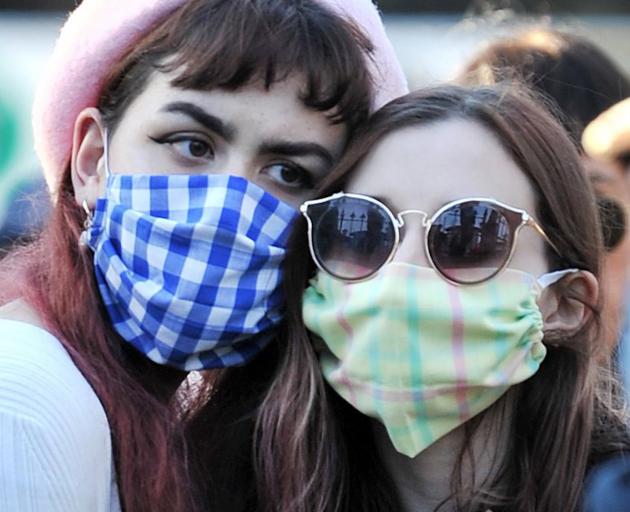 Eva-Parani Collins (left), of Dunedin, and Ella, of the United States, support each other at the Dunedin protest.
Enforcement of the law disproportionately affected people of colour, he said.

A six-month trial of police armed-response teams in New Zealand also bothered him.

The trial finished in April.

One of the protest organisers, Manaakitia Hoepo, told the crowd three people died from the guns of police during that trial.

He read a rhyming statement in which he asked "not to be judged by the colour of my face".

The organisers asked people at the protest to keep to groups of 30, comply with contact-tracing efforts and maintain physical distancing.

Fiona Carter-Todd, an African-American, told the crowd she was due to go back to the US soon.

"The colour of your skin affects the way the world treats you."

White Americans did not face discrimination and, therefore, did not understand privilege, she said.

Another speaker, Edward Ennion, said people at the protest were unified in sorrow and anger about lives lost needlessly and discrimination.

"We’re sick of this, we’re tired but this keeps happening, so we cannot rest."

"The longer we’re quiet about everything, the more people will die. We need to speak up in support of our brothers and sisters."

A police spokeswoman said she was not aware of any issues at yesterday's Dunedin protest.

Looks like a sensible protest to me, unlike what is happening in the US.
That is just senseless rioting.
If you look at the history of race riots in the US since 2010 there is a clear pattern.
They occur in Democrat states, with Democrat Mayors and yet it is Democrats that claim unity with the rioters.
Check it out for yourself. It's easy enough to do with Wikipedia.

You are witnessing an insurrection, not a protest. This isn't a joke. It's an intentional coup against the US Government initiated by an anarchy terrorist group focused on the destruction of the US government and democracy. Legitimate protest marking the death of George Floyd has ended. Antifa has hijacked the protest movement. Sure, not all of these people are terrorists, criminals, or looters; there are some legitimate protesters but not many. Legitimate protesters don't burn down churches. You people at the Octogon aren't standing in unity with BLM commemorating the horrific death of George Floyd. You are standing with the small group of professional criminals who have infiltrated BLM, a group of sole free, spine free degenerate criminals using Mr Floyds death to rob, rape, and steal. You are standing in unity with Antifa, a domestic terrorist group focused on violence and destruction. They want a coup and an insurrection of America. They want to antagonizing people using violence to bring about political change. You aren't helping BLM by supporting this movement. The media is telling you A story NOT THE story. Wake up! Stope stoking racial hatred by perpetuating this!

A coup in the US seems like a pretty good idea to me. The country is an international joke with the leadership they have.