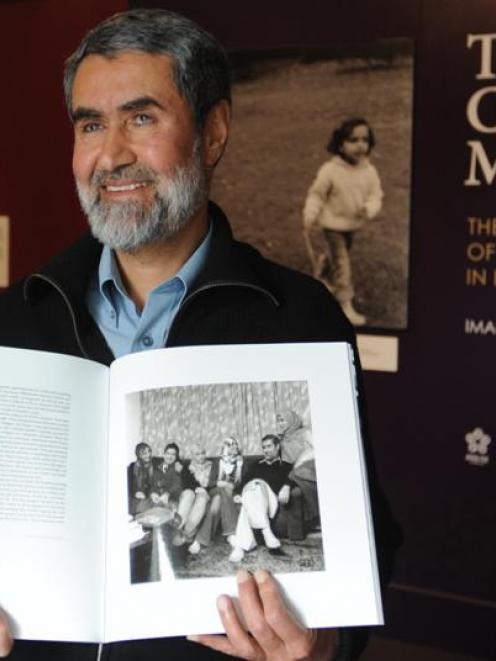 Dr Najib Lafraie, a former minister of state for foreign affairs in the Afghani government in the 1990s, and now a University of Otago lecturer, reflects on a book and an exhibition at the Otago Museum, both featuring photographs by Ans Westra. Photo by John Gibb.
A new exhibition at the Otago Museum is raising awareness about New Zealand Muslims of Asian descent, Dr Najib Lafraie says.

Dr Lafraie is a former minister of state for foreign affairs in the Afghani government in the 1990s and is a lecturer in the University of Otago politics department.

The museum exhibition, titled "The Crescent Moon: The Asian Face of Islam in New Zealand", and a book of the same name both feature photographs by a leading New Zealand photographer, Ans Westra, of Muslims living in New Zealand.

An image of Dr Lafraie and his family appears among 37 photographs of Muslims in the book, which is also part of the exhibition.

Twenty-six images from the book appear in the travelling exhibition, which opened at the museum last Saturday and runs until May 27.

The exhibition, brought together with support from Asia New Zealand, aims to gives a face and voice to New Zealand's Muslims of Asian descent through images by Ms Westra, an immigrant from the Netherlands.

In the making of the book which led to this exhibition, Ms Westra and writer Adrienne Jansen travelled throughout the country meeting the people featured in the book, which also includes interviews with them.

Dr Lafraie said that more than 35,000 Muslim people were now living in New Zealand and had become a significant part of the country's overall population.

They were a diverse group of people, from many different countries and traditions, and the book and exhibition were helping to raise public awareness of that diversity, he said.

She was named a Companion of the New Zealand Order of Merit in 1998 for services to photography, and received an Arts Foundation Icon Award in 2007.