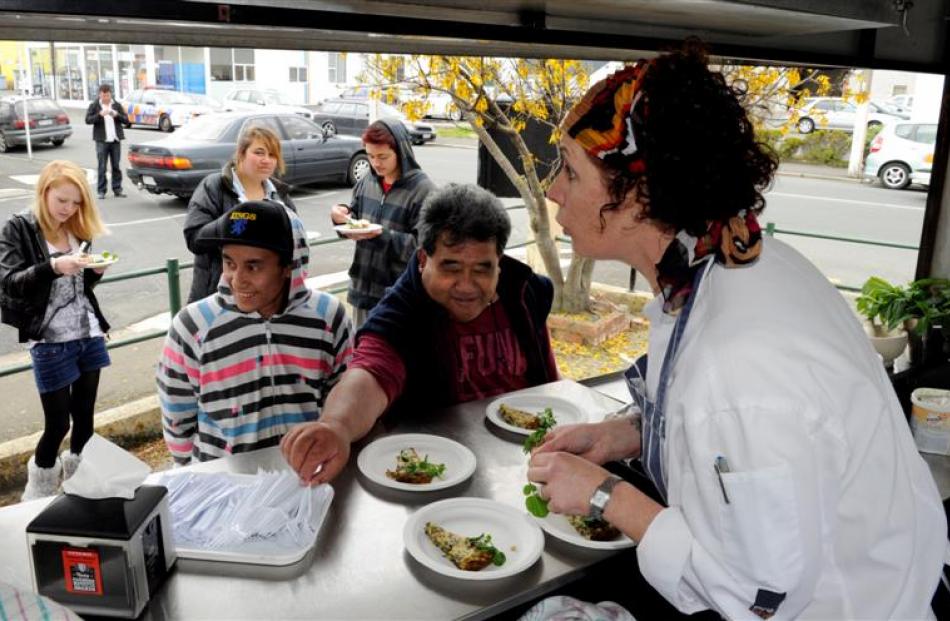 There is nothing like a free lunch, especially when it is cooked by a chef using fresh, local ingredients.

About 30 people from the Kokiri Training Centre and Congregational Christian Church of Samoa, in South Dunedin, were served a special lunch by chef Alison Lambert as a thank you for sharing their car park with the South Dunedin Farmers Market.

The market, an offshoot of the Otago Farmers Market, held every Saturday at the Dunedin Railway Station, will open on the Macandrew Rd site on Wednesday.

It will be open from 3pm to 6pm and feature many of the same vendors as the Saturday market.

As it would be held in a car park used by both the church and training centre, Otago Farmers Market Trust general manager John More thought it was appropriate to thank them for sacrificing the space, and to tell them about what the market did.

"It's really good to get the local people behind it," he said.

About 30 people from the organisations dined on silverbeet and pine nut pie and a karaka berry and apple cupcake which were reportedly "yummy" and "absolutely delicious".

They also learned about what the market would offer them, such as cooking demonstrations, free recipes, and plenty of fresh fruit, vegetables, and other products from as far afield as Wyndham and Waimate.

Church elder Afamasaga Pavihi said the church had been planning for the market for some time and the choir was looking forward to singing at the opening ceremony, which starts at 2.45pm and would also include a blessing.

One of the unique features of the market would be a bell, supplied by the training centre, which would be used to open and close the market.

Mr More said it was rescued from the local league club, which used it to start and finish its games.