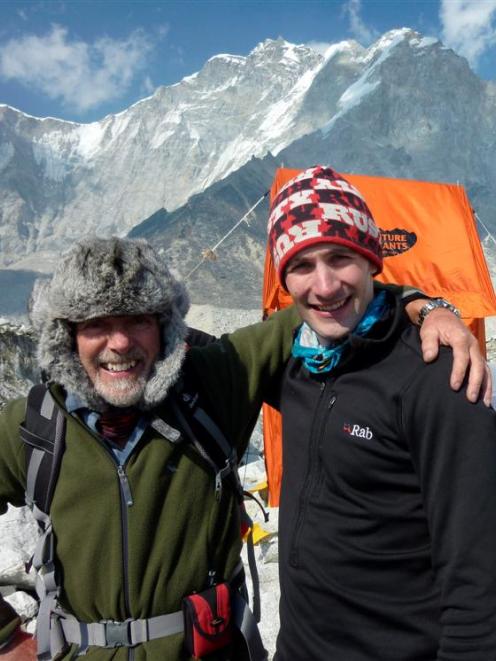 Graeme Hall (left) and son Dean at Mt Everest Base Camp in the Himalayas. Photo supplied.
In the Halls on Mt Everest, there is an adventurous spirit - particularly in Dean Hall.

The 31-year-old former Dunedin mountaineer is making his way up the icy slopes of Mt Everest in the hope of reaching the summit some time next month - May 29 is the 60th anniversary of Sir Edmund Hillary's climb to the top.

Hall is one of eight people from around the globe making the ascent as part of the Adventure Consultants expedition from Wanaka.

His father, Otago Regional Council emergency management co-ordinator Graeme Hall, travelled with him as far as Base Camp and returned to Dunedin this week after seeing his son off on his perilous trek.

Mr Hall said he and his sons had been on many tramping trips over the years and Dean had since taken up mountaineering, conquering Mt Cook among other peaks around New Zealand.

So, when his son invited him to go too, Mr Hall's adventurous spirit began to kick in, and he said: ''OK, but only to Base Camp''.

At 5360m above sea level, Base Camp is difficult enough to get to and Mr Hall (60) said he was pleased just to make it there.

Many people did not make it because they were affected by altitude sickness, gastric problems or colds, he said. 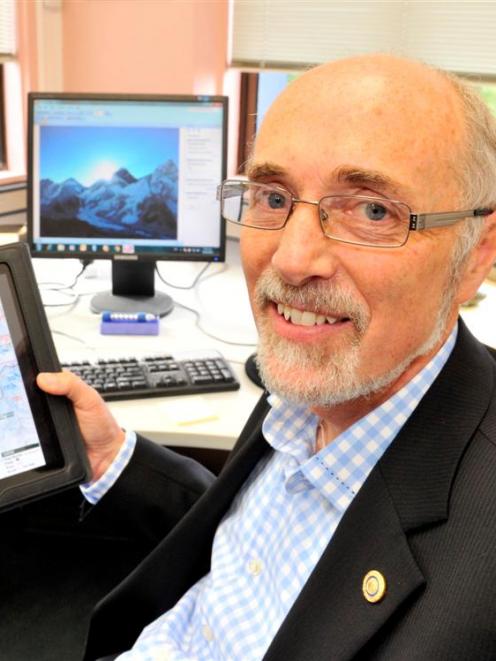 Graeme Hall back in his office. Photo by Linda Robertson.
''I've just turned 60 and I wanted to go on an adventure and experience Mt Everest.''

Mr Hall said the other reason he wanted to make the trip was to make sure his son was well prepared for the trek.

''It's a huge mountain and a huge task, and it would be wrong to say I'm not worried about my son climbing it.

''It's like your child starting school. I took him to the gate, gave him a pat on the head and let him get on his way.''

Mr Hall said it took three weeks to reach Base Camp where he and his son spent 10 days trekking in the Himalayas.

A highlight was climbing Mt Kala Patthar, a 5550m-high peak in the area, he said.

''You get a good view of Everest from there.

''It's amazing country. The mountains pierce up into the sky.''