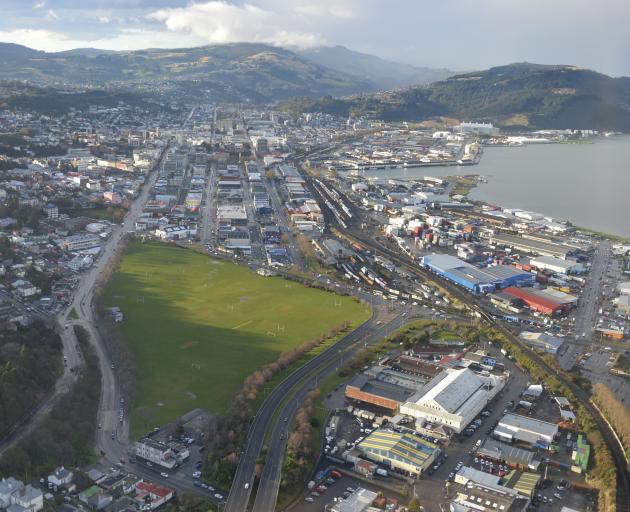 Princes St looking towards the Octagon from South Dunedin. PHOTO: GERARD O’BRIEN
Dunedin's Princes St could be made better for buses, more attractive and "safer for everyone", and the Dunedin City Council is seeking ideas from the public on how to make this happen.

"We want to make improvements to make it safer for everyone using this area and have a corridor that is more efficient for buses."

The council is seeking early feedback on three projects aimed at encouraging people to travel into and through Dunedin using different modes of transport.

The other projects planned are a park-and-ride facility in Mosgiel and bike hubs in central Dunedin.

They have arisen out of a drive to offset traffic disruption expected to result from construction of the new Dunedin Hospital in the central city.

The budgeted cost of the transport changes in Princes St (south of Moray Pl) is $6.4 million; the Mosgiel park-and-ride has been costed at $4.7 million and the central city bike hubs at $2.45 million.

Park-and-ride has been promoted as a way to enable smooth connections to public transport from Mosgiel into Dunedin city.

Feedback is being sought on what people would expect at a park-and-ride facility and they are being asked for suggested locations.

The council also wants feedback on where bike hubs should go.

"We’ve heard that there is a lack of secure, weather-protected cycle parking options within the central city and that this is one of the barriers for people taking up cycling for their commutes," Mr Sargent said.

Princes St is on Dunedin’s main bus corridor from the south.

However, 27% of cyclists were recently observed riding on the footpath and the council attributed this to a lack of safe cycling infrastructure.

Princes St is also well used by motorists travelling into the city from the south.

The council has said buses are often held up at intersections during peak times.

Bus journeys were often delayed and had longer travel times than necessary, the council said.

One idea was a bus lane, but "until we understand the needs and aspirations of everyone who travels on Princes St, we do not yet know what changes will be made".

The council characterised the street as one generally treated as a means to reach the central business district by car, rather than a destination in its own right.

"High speeds by motorists have been recorded, the road has a poor crash record and there is currently poor provision for people walking, cycling and with disabilities.

"As a road that is used by many different people in different ways, we want to make it safer and more accessible.

"We also want to make it more attractive as a destination."

It is expected a proposed design will be consulted on in the first half of 2023.

Construction is planned for "approximately 2024".

An online survey and interactive maps have been created to gather information and feedback.

Feedback will close on July 15.