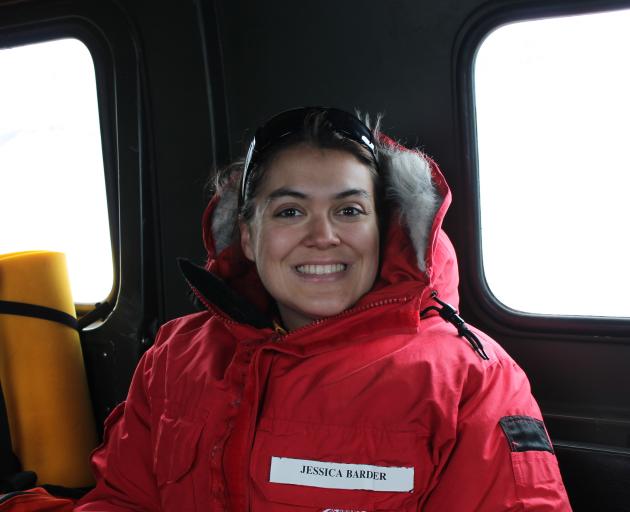 Otago Museum science engagement co-ordinator Jessa Barder travels in an all-terrain amphibious Hagglund vehicle during sea-ice safety training on the Ross Ice Shelf in the Antarctic. PHOTO: USAP
Do you love to pull mechanical objects apart to figure out how they work?

Is dissection day your favourite class? Has your neighbour’s advice on how to properly condition soil helped you finally grow vegetables in your backyard?

Otago Museum is looking for females of all ages who actively embrace science, technology, engineering, and mathematics (STEM) as part of their lives, to feature in a new digital portrait exhibition.

The exhibition, called 100 women, 100 words - infinite possibilities will display photos of 100 women along with a caption of 100 words describing the role STEM has played in their life.

Otago Museum science engagement co-ordinator Jessa Barder said the exhibition was part of an Unlocking Curious Minds-funded project called Full STE(a)M Ahead, for which Otago Museum has partnered with the MacDiarmid Institute and the Dodd-Walls Centre to deliver.

“We want to build relationships between the amazing women we have in our community who have engaged with science in both traditional and non-traditional ways, and those who are curious about how it might fit into their lives.

“Science really is all around us, not just in schools and labs, and I want young people in our community to get to know these women, either through the exhibition or in person, and be inspired by all the options science unlocks for them.”

She said the project also aimed to change young people’s perceptions of who a scientist is, what they do, and how they do it, because despite global efforts, a gender gap in STEM careers persists.

Nominations can be made at otagomuseum.nz/infinitepossibilities and close on May 31. Nominees may be a friend, classmate, teacher, colleague or neighbour of any age.

The exhibition will open in early December and will culminate with the Women in Science Expo, to mark the International Day of Women and Girls in Science, on February 11, 2021.

The exhibition will then go on tour through Southland and Central Otago.