Festival to be marked with match 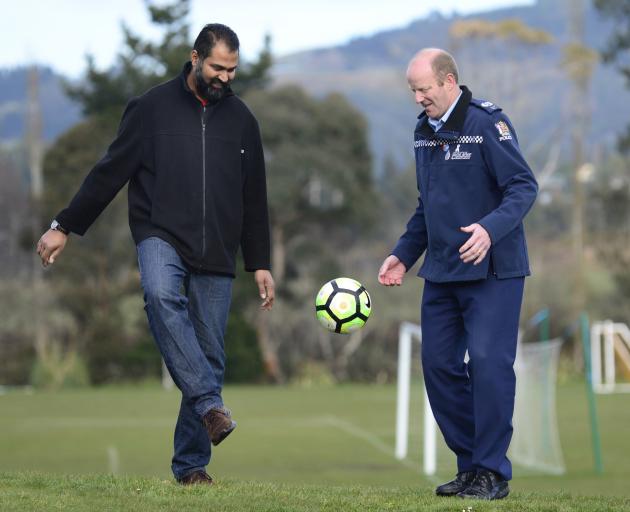 The match will be held on Sunday, and the afternoon will include a public lunch prepared by the mosque, and a minute's silence for the victims of the Christchurch attacks before kick-off.

Otago Muslim Association president Dr Mohammed Rizwan said the idea was Senior Sergeant Craig Dinnissen's, and had come about during the month of Ramadan, while the police and members of the mosque were sitting down sharing a meal.

About 30 players would be involved, and Dr Rizwan said they were expecting crowds of up to 500 people.

"Invites have been sent out to pretty much the wider community."

Eid ul Adha, the "Festival of the Sacrifice" is the second of two Islamic holidays celebrated worldwide each year.

Snr Sgt Dinnissen said as well as being a community event, the game would be a warm-up for the "Blue n' Gold Bobbies", who are preparing to head out to a police soccer tournament in Napier.

Football was a beautiful game when it came to bringing communities together around the world, Snr Sgt Dinnissen said.

The teams were competing for the "Kotahitanga Cup", representing unity, and both the police and the association hoped to make the game an annual event.

It will be held at Sunnyvale Park, and the park gymnasium will be used if it rains.

Dr Rizwan said initially he thought he would need time to find enough players for the "OMA United" team, but everyone he asked was eager to get involved.

While the police soccer tournament was mixed, at this stage the Dunedin police team, and the Sunday match, was all male.

A "meet and greet"and lunch for the wider community would be held about 1.30pm, and kick-off would be at 2.44pm.

People were encouraged to bring a dessert or salad to go with lunch, and families were welcome as there was plenty of space for children's games.