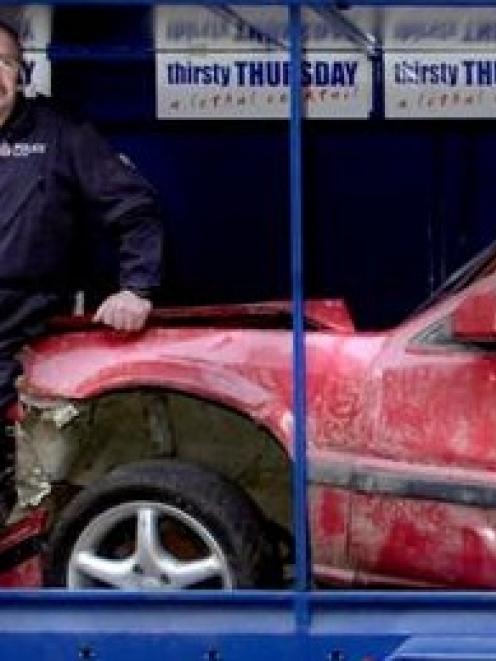 Vehicle safety officer Jeff Fleury, of Dunedin, with the crashed car now used in a young driver education road show around Otago.
Although the number of young Dunedin drivers injured or killed in road crashes in Dunedin reached a four-year low in 2007, police and community road safety advisers say the brakes still need to be put on the grim statistics.

There were 167 crashes involving death or serious injury in Dunedin city last year, down from 206 in 2006.

Southern district road policing manager Inspector Andrew Burns, of Dunedin, said police believed a combination of factors made 2007 one of the safest for young road users in recent years.

"A lot of enforcement initiatives focused on young people. And higher fuel prices influenced those with lower disposable income levels.

"Although the numbers came down we can't get complacent. I would still say any loss of life on the roads is totally unacceptable," Insp Burns said.

"The bulk of recidivist young driver offences involve breach of licences, vehicle defects, or cars which are not warranted. Most young people we only see once or twice.

"The biggest factor for crashes with drivers is inexperience in the first month or so when they go solo."

Of 27 road fatalities in the Otago and Southland (Southern Police District) this year, five people killed were aged between 15 and 20 years.

During the interactive roadshow "Thirsty Thursday", a car involved in a fatal crash in Milton in 2005 is taken to secondary schools.

Pupils also heard accounts from parents of the crash victim.

During the "Drive to Survive Expo" pupils viewed three Mitsubishi sedans of the same model; a race-ready rally car, a car with several unsafe modifications, and a family sedan.

"The point was pretty obvious. If you went off at high speed in the rally car you'd walk away, but in the badly modified car the springs were so bad that cornering at 85km would lead to serious trouble."

Vehicle inspection officers were not seeing as many cars with unsafe "back-yard" modifications, but still alarmingly high numbers of young drivers in cars with little or no tread on tyres, he said.

"And I don't just mean less than 1.5mm, I mean zero - tyres which are right back to the [steel] belts," Mr Fleury said.

Insp Burns said during a vehicle inspection campaign targeting modified vehicles in Invercargill last weekend 20 were taken off road, 17 of which had safety faults, three with defects.

Of the 17 "safety reject" vehicles, five had a tyre tread of less than 1.5mm, or no tread at all.

Council figures showed in 2006, 16 drivers on restricted licences were involved in serious or fatal crashes, compared with three in 2007.

Learner drivers were involved in nine serious or fatal road crashes in 2006; this dropped to five last year.

One person has been killed every 10 days on Otago and Southland roads this year.

If the trend continues, the district would post its worst record for more than five years.

The numbers generally have been dropping from highs reached in the 1990s.

Thirsty Thursday is a joint initiative between the Dunedin City and Clutha District Road Safety Partners (DCC, NZ Police, ACC and CDC) and the To Be Advised Charitable Trust.