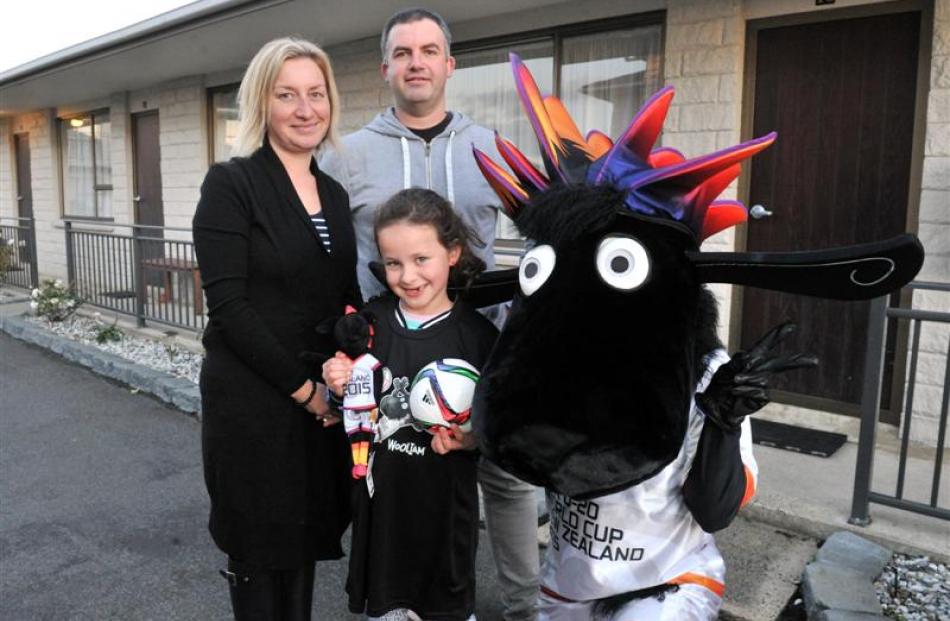 Dunedin Tech football player Charlotte Wheeler with her parents, Julie and Gavin Wheeler, and the Fifa U-20 World Cup mascot Wooliam at the Adrian Motel in St Kilda yesterday. Photo by Linda Robertson.

When 7-year-old Charlotte Wheeler saw water in the hallway of her family's house in St Kilda, she knew she would not be staying at home for a while.

The Plunket St home was inundated with water during Dunedin's flooding this week.

Charlotte's initial reaction was: ''I thought we were going to go to a motel''.

''The water was all in the hallway and up the walls,'' Charlotte said.

The St Clair School pupil was right, with the family having spent the past three nights in a St Kilda motel and facing the prospect of many more nights away from home.

But the news was not all bad for Charlotte, who received a visit from Fifa Under-20 World Cup promoters yesterday.

The football enthusiast, who plays for Dunedin Technical, was given tickets to today's tournament double-header at Otago Stadium, as well as a toy mascot, miniature football, poster and T-shirt.

Fifa regional sales and marketing manager Caroline Walker said Football South contacted clubs to see what it could do for affected families. That led to the visit from Fifa, she said.

''Seeing how many families were affected, we just wanted to bring a bit of a smile to some faces,'' Ms Walker said.

''With all the support we've had from the public and local football clubs throughout the tournament, we wanted to do something nice for the clubs' members.''

Charlotte's mother, Julie, said the family was preparing to split up for the weekend, with the motel they were staying at booked up.

''Then we'll be back to the motel after that,'' Julie said.

Charlotte's father, Gavin, said the family might have to spend months in motels or renting while insurance claims were sorted out.

He said the family had a six-month housing cost provision under its insurance policy.