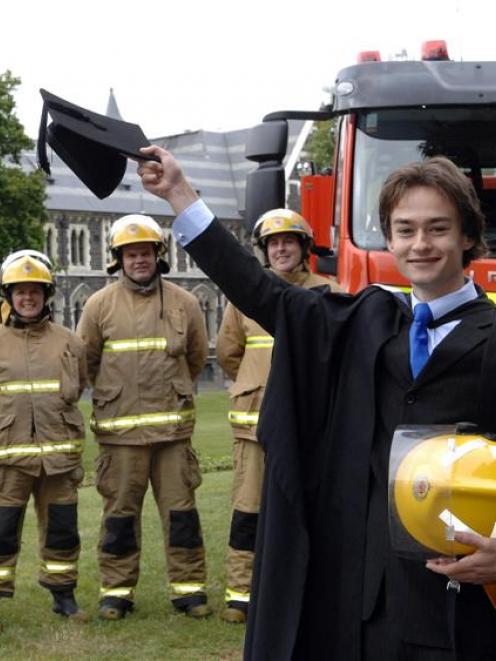 Preparing to graduate from the University of Otago with a BSc (Hons) degree in chemistry on Saturday is Casey Jones, a volunteer firefighter with the Ravensbourne Volunteer Fire Brigade, pictured with fellow firefighters (from left) Will Hall, Lindsay Robertson, Regan Soper and Station Officer Jason Bryant. Photo by Linda Robertson.
After graduating from the University of Otago at the weekend, Ravensbourne resident Casey Davies is continuing his twin passions of studying chemistry and volunteer firefighting.

Mr Davies graduated with a BSc (Hons) degree in chemistry at a Regent Theatre ceremony at 4pm on Saturday and next year will continue his studies for a PhD.

After two years as a member of the Ravensbourne Volunteer Fire Brigade, he enjoys the company of his fellow firefighters, who have to rely on each other in emergencies.

"It's great. The people, they are absolutely amazing and very friendly."

After buying a house at Ravensbourne in late 2009, he heard the nearby fire siren as he was unlocking the front door.

It felt good to know there was a brigade in the area and he soon rang up to volunteer.

To celebrate his graduation on Saturday, fellow firefighters brought the Ravensbourne fire appliance down to the university campus.

The knowledge of chemical hazards he has gained from his studies may prove helpful should his brigade be called to an emergency involving hazardous substances.

Next year, Mr Davies will also help teach a fourth-year "management of chemical hazards" paper at the university.

This was the largest number of doctoral graduands to graduate from the school in person at a single ceremony.