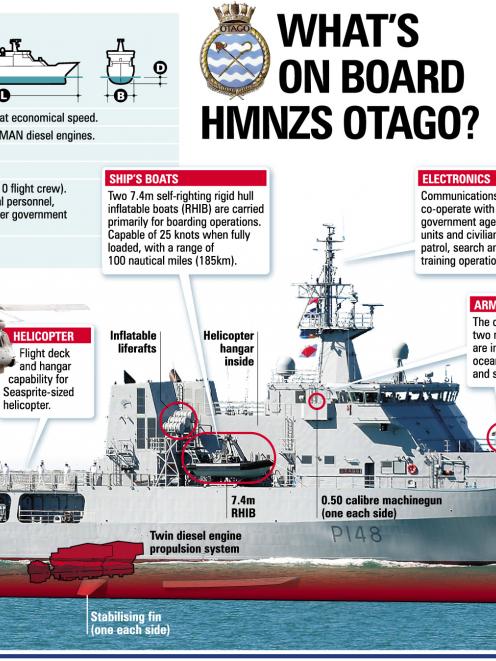 New offshore patrol vessel HMNZS Otago will come alongside in its home port of Dunedin for the first time this morning.

The 85m, 1900-tonne ship is one of seven built for the Royal New Zealand Navy as part of the $500 million Project Protector programme.

They include a sister ship to Otago, four inshore patrol craft and the multi-role ship HMNZS Canterbury.

Otago, commanded by Lieutenant-commander Simon Rooke, is due in Dunedin at 10am, for five days of ceremony and welcome.

The $85 million ship has travelled from its operational base of Devonport, Auckland.

Dunedin's resident naval officer, Lieutenant-commander Ian Marshall, said Otago was expected to arrive at Taiaroa Head about 5.30am, where it would later be met by a pilot launch, and was scheduled to be alongside at the Birch St wharf at 10am.

The ship's company will march through the streets of Dunedin in a charter parade on Saturday and the ship will be open to the public on Sunday.

VIPS, including the mayors from across the region, will take part in a special welcoming ceremony and ship tour today.

The navy band will also be in Otago for performances in Dunedin, Balclutha and Gore during the ship's visit.

Chief of Navy Rear Admiral Tony Parr will attend the charter parade on Saturday, when the ship's company will be presented the charter to the city, giving officers and crew freedom to march through the city of Dunedin with swords drawn, bayonets fixed, colours flying, band playing and drums beating.

The ship's motto - He Kaitiaki no nga tai ki te tonga - means southern guardian and its crest, featuring a claymore (a large Scottish sword) and a shepherd's crook, was designed in the 1950s in an Otago provincial contest by Ernest Pope, a Roxburgh Hydro schoolboy, who later joined the navy.

The same crest adorned the first Otago, a modified Whitby-class frigate that served the RNZN between 1960 and 1983.

The new Otago was the first of the two offshore patrol vessels to be accepted by the navy in February.

Its role will be patrol and surveillance operations for the defence forces and various government agencies around New Zealand's 200-mile exclusive economic zone, south into the Southern Ocean and north into the Pacific.

Otago and her sister ship, HMNZS Wellington have a crew of 35, and can also carry 10 flight crew to operate a helicopter and 34 other personnel.

They have a range of 6000 nautical miles, a top speed of 22 knots and carry a 25mm Bushmaster naval gun and two .50 calibre machine guns.

Otago arrived in April a fortnight late from Australia because of engine trouble and two years after the deadline the Ministry of Defence had set the shipbuilders in Melbourne.

It was originally due in New Zealand in 2008 but a range of issues, including that the ship is overweight, delayed its final acceptance by the navy.

The ship will be linked to the provinces of Otago and Southland, but most of New Zealand's home ports are ceremonial only, with the bulk of the navy, including Otago, operationally stationed at the Devonport Naval Base.

It was not known yet how often Otago would visit its home ports, although, with the four inshore patrol vessels now also operational, there would generally be an increased naval presence in the region, Lt-cmdr Marshall said.

Otago will travel to Bluff, its other home port, on Tuesday, for a three-day visit there.