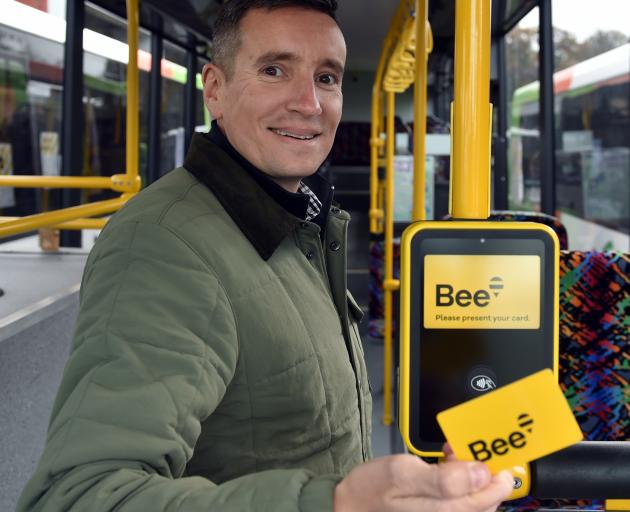 The Otago Regional Council (ORC) is set to consider introducing flat fares, during a meeting tomorrow.

The proposal for a temporary ‘‘simplified’’ structure would see adults pay $2 and children $1.50, when travelling with a new Bee Card.

For those paying cash, a flat fare of $3 would be charged, regardless of where a passenger was travelling to and from.

ORC Transport Manager Garry Maloney said the proposal was about timing, as Covid-19 had made many people review the way they see travel.

“We know many people have enjoyed having fewer cars on the road.

‘‘For ORC, we are looking not only at how we can continue to keep up the contactless safety measures that are necessary due to the pandemic, but also how to make bus travel more convenient and attractive.’’

Mr Maloney said cheaper and simpler fares, along with the new Bee Card, which speeds up the boarding process with a tag off tag on system, was a way to achieve that.

The Bee Card, which is a part of the Regional Integrated Ticketing System (RITS) being implemented across nine regions in New Zealand this year, would also allow passengers to top up online.

The proposed fare structure would also allow SuperGold card holders to travel for free at all times.

In Queenstown, which already has the same flat fares, the $10 airport cash fare would be reduced to $4.

Mr Maloney said most passengers travel across multiple zones and a flat fare would make it more affordable.

‘‘For example, a one-way trip from Mosgiel or Port Chalmers into the Dunedin centre covers three zones and would cost $4.44 under normal fare rates.’’

Councillors will also consider a proposal for ORC to support fare-free travel, in Dunedin and Queenstown, until the Bee Card system is installed, to help avoid confusion.

If councillors agree to the proposal on Wednesday, the ORC will then need to consult the community, in order to amend the Regional Public Transport Plan.

The proposed time-frame for public consultation was across a two-week submission period in June and July, with the aim for a decision to be made by the end of July.

If adopted, the fare system would be revisited at the end of the year.