Flatmates first to earn rare diploma in city for some time 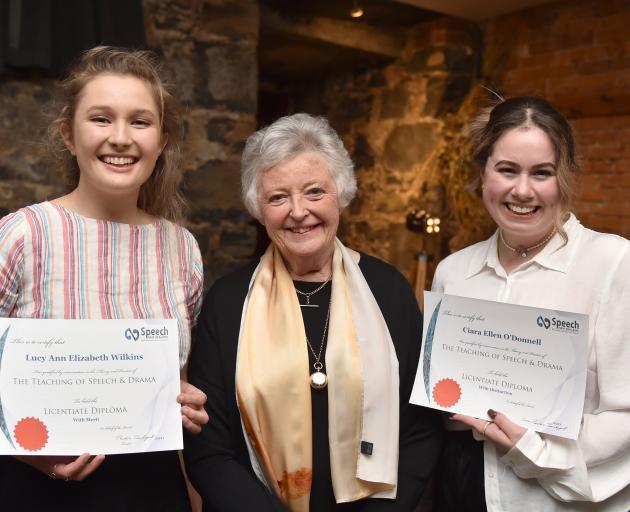 Qualification buddies ... Holding their recently achieved licentiate diplomas in the teaching of speech and drama on Tuesday night are Lucy Wilkins and Ciara O’Donnell (both 22), of Dunedin, with their teacher Mary Flaherty. PHOTO: GREGOR RICHARDSON
A rare and respected diploma in speech and drama has been awarded for the first time for many years in Dunedin.

Not only has the dry streak been broken with two qualifications awarded this year, but the recipients are flatmates.

Lucy Wilkins and Ciara O’Donnell (both 22) received licentiate diplomas in the teaching of speech and drama on Tuesday night.

The diploma qualified recipients to teach speech and drama and establish their own studio.

Ms Wilkins said they both started speech and drama lessons at a young age with private teacher Mary Flaherty.

The pair narrowly missed meeting each other for  years until one day joining Mrs Flaherty for a post-exam lunch.

They quickly became good friends and later decided to become flatmates, she said.

Ms O’Donnell said she was ‘‘painfully shy’’ as a child and found the lessons helped her confidence and developed essential skills.

She was not sure if she wanted to go into teaching, but she enjoyed the work a lot and stuck with it all the way through to a diploma.

It was a difficult and rare qualification to get that felt ‘‘really nice’’ to have achieved, she said.

Mrs Flaherty said there were not many licentiate diplomas in the teaching of speech and drama awarded annually in New Zealand, and there had not been one in Dunedin for many years.

She had watched the girls grow up and it felt a bit like they were leaving the nest.

No matter what direction they took in their career she was sure the skills they had learned would serve them well, she said.

The qualification was awarded through Speech New Zealand.

The women are both students at the University of Otago, Ms O’Donnell majoring in English education and Ms Wilkins in linguistics.