Focus on quake origins through study of ice 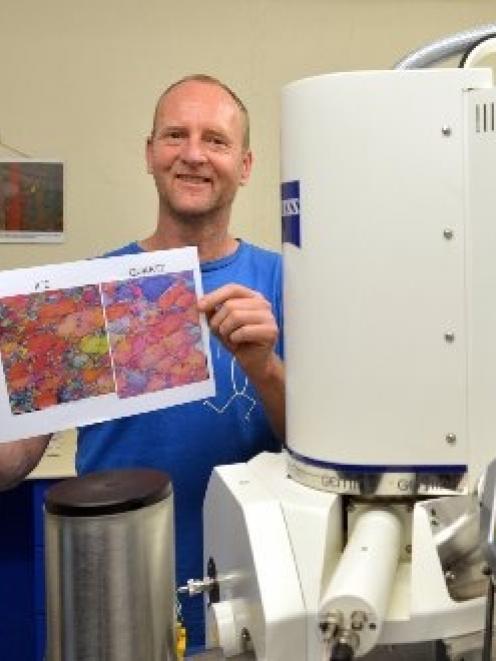 University of Otago geologist Prof David Prior, pictured beside an electron microscope, displays greatly magnified images of the structure of ice (at left) and quartz. Photo by Peter McIntosh.
By studying the microstructure of ice, University of Otago scientists hope to gain new insights into the origin of earthquakes, deep below the Southern Alps.

Otago scientists are focusing on the similarity of ice to rock, both being crystalline solids, and both being deformed - changing shape in response to force - in similar ways.

The research is headed by Prof David Prior, who has become a world leader in a technique linked to the use of electron microscopes and used to study the microstructure of ice.

Prof Prior has spent about 18 months applying the laboratory technique, known as ''electron back-scatter diffraction (EBSD)'', to ice, at the university's Otago Centre for Electron Microscopy.

''We have made the technique routine and reliable and are the only lab worldwide that can do this,'' he said.

The technique provided ''maps of the microstructure of the ice'', which helped boost understanding of how the ice developed, and of its physical properties.

''This is the first research of this kind in the world as nobody else has our capabilities of microstructural imaging of ice through EBSD.''

The Otago research had been going ''spectacularly well'' and several international groups, including from MIT in the United States, had recently used the Otago facilities.

Rocks found at New Zealand's alpine fault zone were ''probably the best in the world to tell us about what happens around and beneath big earthquakes'', he said.

And such processes might, in fact, control earthquake ''nucleation'' - the initial rock rupture involved.

The post-quake record of what had happened had remained in the rock microstructure, but scientists ''lacked the tools'' to read this. The Otago experiments could help ''decode the macrostructural record in rocks'', he said.

Mr Vaughan, who was born in Canada, said ice had many advantages.

It could be readily produced to order, including with fine crystalline microstructure, and did not require the equipment needed to generate the much higher pressures needed for deforming rocks, he said.