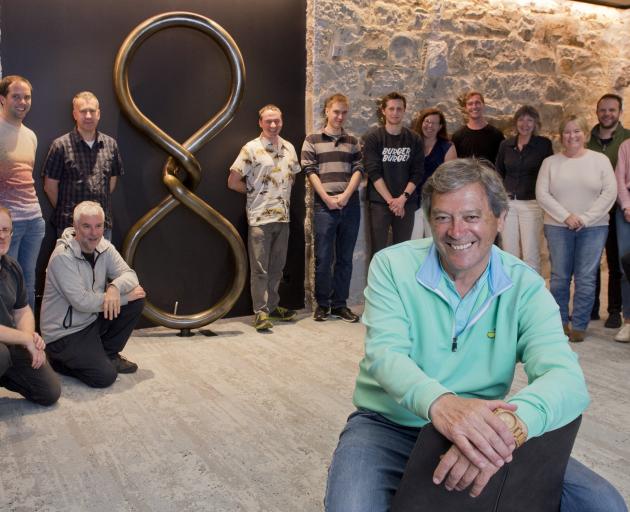 Twelve years on, Mr Taylor looks back on the 30-year journey his now world-leading company has been on as he receives one of the highest rewards in the New Year’s honours list, a Knight Companion of the New Zealand Order of Merit (KNZM).

"In the Maori worldview there’s this saying: ko nga tahu a o tapuwai inanahi, hei tauira mo apopo, which is the footsteps you lay down in your past create the paving stones of where you stand today.

One of those things was a crucial moment in April 2008, when Mr Taylor walked into work planning to close the business down; it was $2million in debt and a major contract had failed in India.

"I walked in and our receptionist who’s still here, she was sitting at the front desk and she held up the newspaper and said ‘Look at this, how awful would that be’."

On the same day Fisher & Paykel Appliances’ had announced it was to cut 430 jobs from its Mosgiel plant and Tamahine Knitwear revealed it was shutting down, eliminating a further 50 jobs in Dunedin.

"I looked at Liz [his wife, Liz Grieve] and thought we can’t do that today. And we didn’t."

That night he said he came up with an idea to fix the situation and staff gave it their backing.

A few weeks later the America’s Cup came up again and the company won an air traffic control simulator contract to drive it forward.

"If Fisher & Paykel hadn’t closed down that day we wouldn’t be here today."

Mr Taylor said his partner, Liz Grieve, had been a strong supporter of his and none of his success would have come without her.

Mr Taylor is adamant his knighthood is because he is just the focal point and storyteller for ARL and the staff "who actually wrote the story and are continuing to write it today".

"I genuinely know none of this would have happened — I couldn’t get this on my own because I don’t know anything. I’m surrounded by people who are way cleverer than I am."

Many of the people who started at ARL with Mr Taylor are still there.

He gives particular credit to Graham McArthur who took a risk with Mr Taylor to buy their first studio off TV One 31 years ago using a $500,000 bank loan.

He also credited Dr Geoff Wyvill who told him back in 1989 the future for computer graphics was going to be turning digital data into pictures.

"I had no idea what he was talking about," Mr Taylor said.

"And he said ‘Here are four students who will do that for you’. Those four students are still here," Mr Taylor said, referring to Paul Sharp, Stu Smith, Craig McNaughton and Chris Haig.

Mr Sharp and Mr Smith wrote the code for the first America’s Cup the company worked on, in 1991.

"This is the year this honour is bestowed, the America’s Cup is being raced in New Zealand when it’s announced and the two guys who wrote the code are here working on the America’s Cup, on the Waitemata."

The ARL founder acknowledged Sir Eion Edgar, Murray Valentine and Graham Gosney for their support in the animation company’s early years as the first people to invest in it.

Mr Taylor, who was appointed a Companion of the New Zealand Order of Merit in 2012 for his services to television and business, was also recognised for work he does outside of ARL. He is working on an initiative called Tech for Good, developing technology tools for use in education and healthcare.

Mr Taylor has helped create virtual learning environments for prison inmates in a collaboration between the Dunedin Methodist Church and ARL.

For the Tuia 250 commemorations, he developed digital simulations of the re-created ancestral voyages undertaken for the commemoration, and those virtual journeys were made freely available online.

A well served knighthood, such a positive guy!!!