The future for Forbury Park is uncertain. PHOTO: STEPHEN JAQUIERY
Forbury Park Trotting Club plans to fight for its future and will go to court to keep its racing dates if necessary. 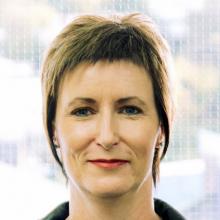 Della Henderson
The Dunedin club was axed from the racing calendar by the Racing Industry Transition Agency (Rita) last month, subject to a submission process that closed on Monday.

Chief executive Della Henderson confirmed the club had made a lengthy submission seeking a reinstatement of its racing dates.

The decision to cut the dates based on the location of the horse population and wagering performance was flawed, she said.

"The club is fighting back," Henderson said.

"The main point is we want a reinstatement of our racing dates and then we want an appropriate, proper and independent consultation process to make some changes going forward.

"The next step, if we are unable to get the outcome we seek, is to take legal advice.

"We have been speaking to our lawyers around the possibility of perhaps putting an injunction on the calendar and seeking a judicial review."

Henderson felt the process that led to the Racing Industry Transition Agency removing the dates of nearly half the trotting clubs in New Zealand lacked independence.

"They haven’t developed and shared with clubs the process around assessing clubs in terms of allocating licences. It appears to us there has been some predetermined decisions."

Henderson accepted the club had not performed well financially in the recent past but was "on a strategic path to make considerable improvements".

Before lockdown, it was projecting a healthy surplus of $54,000 which would have represented "a big turnaround from where the club has been".

Henderson did not believe the horse population was "a material factor" either, because about two-thirds of the horses that competed at Forbury came from outside the region

The Forbury Park Trotting Club last season held 19 trotting meetings, and 27 meetings were held by the Otago Greyhound Racing Club at the track in the same period.

It was also the venue for the Tuapeka Harness Racing Club’s annual race day.

If the Forbury Park club was unsuccessful in having its racing dates reinstated, there was the possibility it could hold meetings at the Otago Racing Club’s Wingatui racecourse.

"But we will need time to develop these plans, so we need our racing dates back.

"The future of racing here and around Dunedin is going to be lost if we can’t change this. The livelihoods of a whole lot of people are impacted and people are already impacted by Covid.

"And now you are going to find ... trainers, owners, the future of our amenities, the restaurant and bar are all going to be impacted by this decision."

The Racing Industry Transition Agency will consider the submissions before confirming the calendar on July 3.

That deadline could shift as its is understood the Racing Industry Transition Agency has received a large number of submissions.