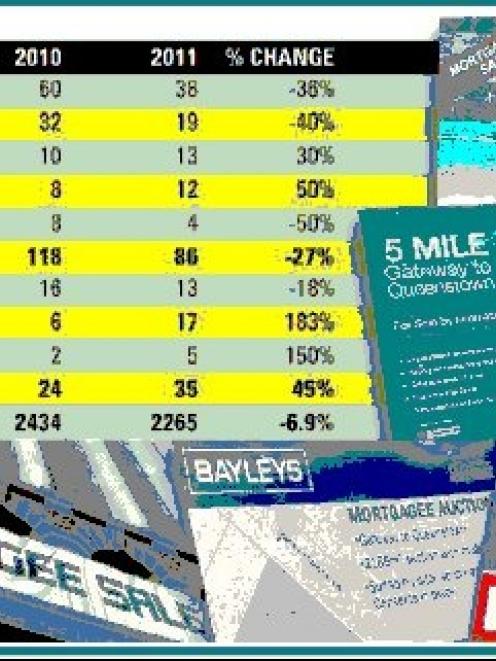 Mortgagee Sales
Despite the worst of the economic recession being over for two years, mortgagee sales are trending higher again, particularly in provincial and rural areas.

There were 2265 forced sales nationally last year, 169 fewer than in 2010 and 759 fewer than the record year of 3024 sales in 2009, figures released this week by Terralink International show.

In line with the national pattern, the number of forced sales in larger urban centres in Otago and Southland declined last year, while the number in most rural and provincial areas in the South rose.

He said he was not surprised.

"While we are over the recession, a lot of people out there are hurting.

"In December last year there were 223 mortgagee sales, or more than seven a day.

"That's the second-highest ever recorded for a December, and just 49 fewer than December 2009 when New Zealand was at the height of recession."

The proportion of individuals with a single property facing mortgagee sales increased last year, up from 19% in 2010 to 22%.

It was "more than likely" these sales were for family homes, not rentals or investments, Mr Donald said.

"More Mum and Dad property owners are losing their homes. It's hard to claim things are getting better for ordinary Kiwis while this trend continues."

Wellington was one of the few large urban centres to record an increase in forced sales last year (up 34%).

The number of forced sales increased in Waikato, Marlborough, Bay of Plenty, Hawkes Bay, the West Coast and Southland.

Asked why sales were rising in rural and provincial areas, Mr Donald said he was most familiar with the Hawkes Bay area.

Mortgage rates are at their lowest levels for decades.

Mr Donald said if homeowners could not service a mortgage at 5%, there could be even more mortgagee sales if mortgage rates rose.

"There must be other factors going on - increasing living costs perhaps, or people losing their jobs and not being able to find another."

Banks were also starting to force sales once homeowners had exhausted their savings or were unable to find employment, he said.