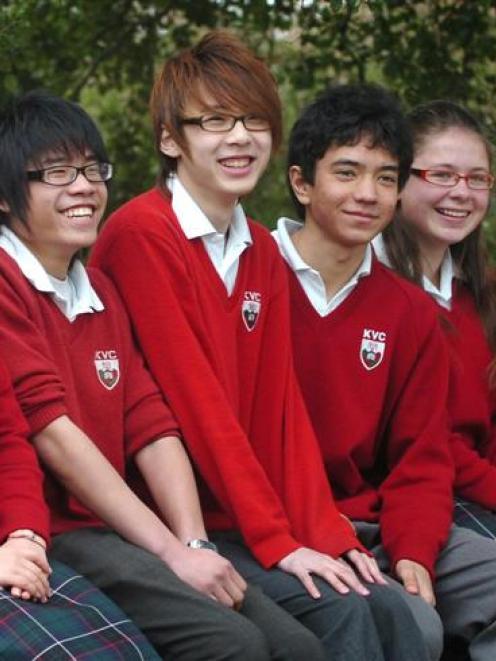 Some of the 46 international pupils at Kaikorai Valley College. Photo by Peter McIntosh.
A 23.3% increase in the number of foreign fee-paying (FFP) pupils at Otago secondary schools during the past year is taking some financial pressure off school budgets.

The number of FFP pupils recorded in the Ministry of Education's July roll return reached 703 in 2003, but numbers declined to 409 in 2006.

There was an increase to 421 last year, but research by the Otago Daily Times found the number had swelled to 519 this year.

Kaikorai Valley College pupil Bank Hansanon, of Thailand, is one of 46 FFP pupils at the school.

He said, like most, he was here to improve his English and get an American-style education at a lower cost than he could in Australia, the United Kingdom or the United States.

Otago principals are delighted with the growth because it provides cultural diversity to the region's schools and much-needed extra funding.

Many principals have long criticised the Government for not providing schools with sufficient funding, but the money from international pupils is taking some of the pressure off.

"They take financial pressure off schools.

"The money they pay for tuition helps with budgeting.

"It's great to have kids from different parts of the world and share their cultures.

There were also economic benefits for the community.

Home-stay owners were paid to accommodate international pupils and Mr Corkery believed if the pupils were given regular meals of mutton and other New Zealand products, they would take their love of them back to their homeland, which might expand export markets.

"If I didn't have international students, I would have bigger classes and [fewer] teachers.

"They provide funding so we can afford more teachers and have smaller class sizes.

"They contribute to the quality of education."

Mr Craigie believed the economic climate in Asia was a significant factor in the resurgence of international pupil numbers.

The average fee charged by New Zealand secondary schools to foreign fee-paying pupils in 2007 was $11,388, but schools can charge whatever they like.

When the Asian economy slumped, Asian parents found it uneconomical to send their children to New Zealand and many schools lost their pupils.

The fluctuating New Zealand dollar was also an issue.

Mr Craigie believed international pupil numbers were increasing again because the Asian economy was recovering and many schools had been active in seeking pupils from other regions.