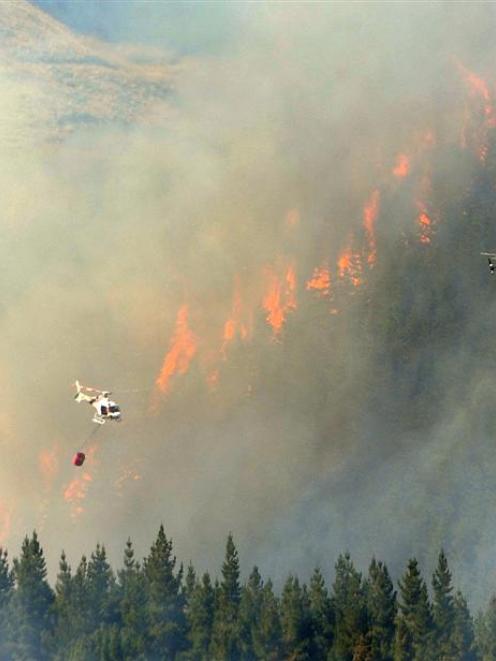 Helicopters battle the blaze on Thursday. Photo ODT files
Firefighters say forecast rain for Monday will help them fully extinguish the huge forest fire that has raged near Dunedin this week, as the bill for battling the blaze has passed the half million dollar mark.

They say they have it contained within 820 hectares, but that it could be weeks before it is out.

Up to 70 firefighters were still at the Mt Allan plantation, 30km northwest of Dunedin, today. Ten helicopters were employed to help fight the fire earlier in the week, but that was down to five today.

The fire was contained within firebreaks, allowing the crews to begin working inwards to stamp it out, he said.

Winds of about 15kmh were not too much of a problem today, however it was up to 27degC on the hill, which made it hot, tiring work for the firefighters, he said.

A bit of forecast rain for tomorrow might help but it was hoped there would be more rain on Monday.

"If we get a lot of rain on Monday that's going to help." The fire started on Tuesday, apparently by friction on a rope used on a log-hauler.

However, Mr Still said that was just speculation at this stage. The cause of the fire was being investigated and a number of possible causes were yet to be eliminated.

It was early days but the fire authority had to cover its costs, and if possible it would look to recover them if someone was found to be at fault, he said.

A fixed-wing aircraft waterbombed flare-ups breaking out in areas of scorched ground yesterday. It was able to dump 2000 litres of water, then be refilled and back with another load of water in seven minutes.

The battle to control the fore had been a sustained, multi-agency affair, with crews coming from stations around the district -- from Waitaki, Clutha and Dunedin city, as well as the forestry company Wenita, which responsible for the forest.

Most of the efforts were being directed along the fire's eastern flank, to protect the Dunedin's water catchment area.

Residents of five evacuated houses south of the fire were able to return to their houses yesterday, while some walking tracks in the area also reopened.