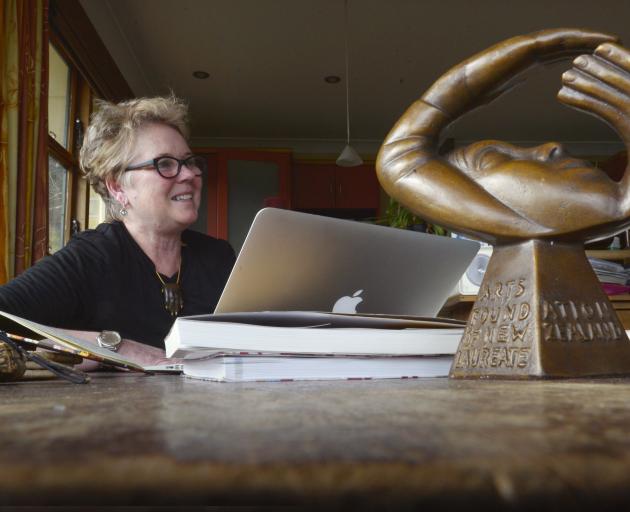 Arts Foundation laureate award winner Laurence Fearnley and her trophy. PHOTO: GERARD O'BRIEN
Dunedin author Laurence Fearnley has won what she describes as a morale-boosting award that further proves the abilities of the city's writers.

Fearnley was the only South Island-based winner of an Arts Foundation laureate, announced last weekend, and the only writer among the 10 laureate awards that celebrate artistic pursuits from dance to design.

The awards are designed to celebrate artists the foundation considers have outstanding potential for growth.

Fearnley, a former Burns Fellow, said the award was "a big boost to morale", and recognition of her career as a writer.

Being a Dunedin recipient was also important, as it showed creative cities were not just in the north, something backed up by Dunedin poet and writer David Eggleton being appointed New Zealand Poet Laureate last month.

The awards were a "wonderful acknowledgement" of Dunedin's literary capabilities.

A $25,000 prize - about five times the advance for a novel - that went with the award was also helpful.

"When you think of it in those terms, you can see how important it is."

Dunedin-born and bred choreographer, dancer and video artist Louise Potiki Bryant, a former Ngai Tahu artist in residence at the Dunedin School of Art, won a laureate for choreography and dance.