The Otago Regional Council has invited four firms to take part in a competition to provide a design for the proposed new central Dunedin bus hub, in Great King St. 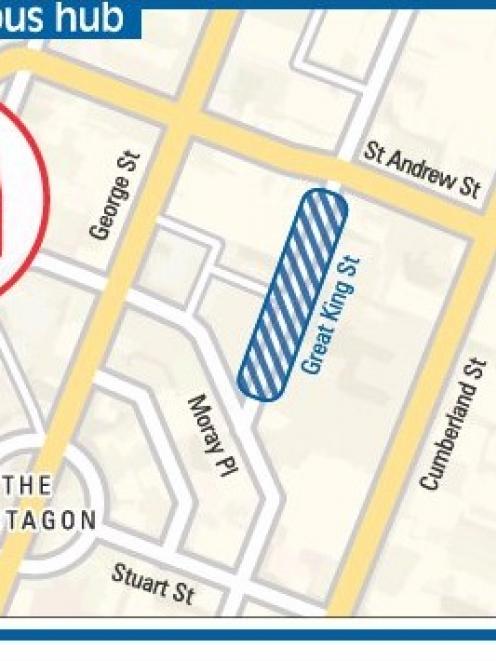 Click to enlarge map
The preferred location for the hub is near the central police station.

Regional council officials have said the hub will start operating about July-August next year.

The public will have its say on aspects of the proposed design early next year, after the council has decided on its preferred design.

The hub is part of planned wider regional council moves to phase in more direct, faster bus routes within the city. In a report tabled at a council committeemeeting yesterday, council director corporate services Nick Donnelly said staff had invited ''concept designs'' for the hub.

The concepts were scheduled to be available for a ''closed review'' late next month.

''Once the review is complete and the preferred design endorsed by council, it will be used for wider stakeholder engagement,'' he said.

The regional council's finance and corporate committee yesterday voted to receive the report, and Crs Michael Deaker and Sam Neill will take part in the design review. Council staff will also contribute.

The committee also accepted a recommendation that a New Zealand Transport Agency representative, Dunedin City Council staff (one transport, and the other urban design), and up to two DCC councillors be asked to help the review panel with their considerations.

Regional council support services manager Gerard Collings said the four firms had been approached about three weeks ago, and, overall, they provided a mix of architectural, engineering and transport design expertise.

The expectation was that the competition winner would become the preferred contractor to undertake the hub development work, he said in an interview.
Making only a limited number of invitations provided an incentive for participants to put in ''some time and effort'', knowing they had a realistic chance of becoming preferred contractor.

Holding an invited design competition provided more ideas, and would ''utilise more than one brain''.

The contest would also bring ''a sense of reality'' to the project and ''some momentum'' was building.

Mr Donnelly said significant work had also been undertaken to ensure that the movement of buses in and out of the preferred hub location in Great King St between Moray Pl and St Andrew St could be achieved.

The review had identified ''some minor modifications'' that would improve access to and from the hub, he said.