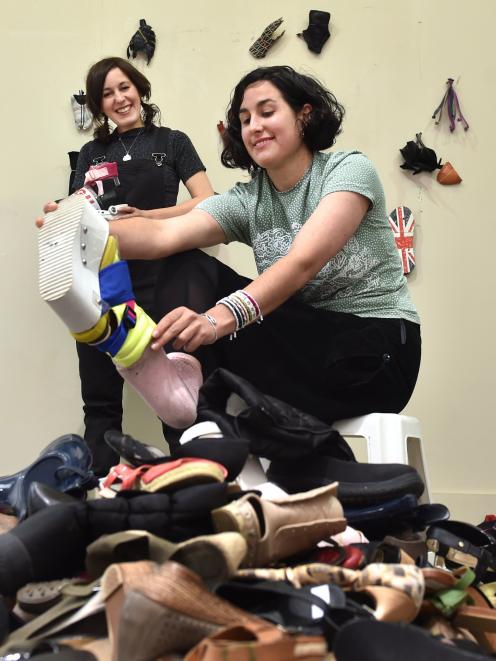 Dunedin Fringe Festival performance art workshop Frankenfoot — The Redux co-collaborators Louise Clifton (left) and Rachel Blackburn at their workshop and exhibition space at 165 George St. Photo: Peter McIntosh.
It's alive and it has a sole.

Unwanted shoes are being given a new life at the Dunedin Fringe Festival performance art workshop Frankenfoot — The Redux.

Rescued shoes were being used in seven workshops at a vacant shop in George St.

A beautifully ugly creation was made using the base of platform shoes and the top of neon basketball boots, which had the toe and heel cut off to make it appear like a sandal.

The straps on the shoe were made from a piece of a backpack and duct tape. The tongue was made with a piece of screen-printed leather. The wearable shoe was held together with upholstery pins.

The workshops end this weekend. A five-hour workshop for adults ran yesterday from 10am, and two-hour workshops for children aged between 8 and 14 run from 10am and 2pm today.

"It’s amazing what kids can do in two hours because they are right into it," Ms Clifton said.

The show was "the redux" as it had returned to the festival for a second year and because it took inspiration from the 1984 horror comedy movie The Toxic Avenger, which had sequels.

In the movie, the main character lives in a rubbish dump after landing in a drum of toxic waste transforming him into a hideously deformed creature of superhuman size and strength.

To recreate the feel of the movie at the workshops there were rubbish bags,  "trash queen" mannequins and radioactive seagull and rat soft toys among hundreds of pairs of unwanted shoes.

The dump in the workshop was also a metaphor for consumerism and the disposability of footwear, Ms Blackburn said.

A free exhibition of the Frankenfoot shoes was on today and tomorrow at 165 George St.

After the exhibition  the hideous creations would be strapped on their makers’ feet and an attempt made to integrate them into the human social patterns of the city.

Embrace the monsters which walk among us, Dunedin.