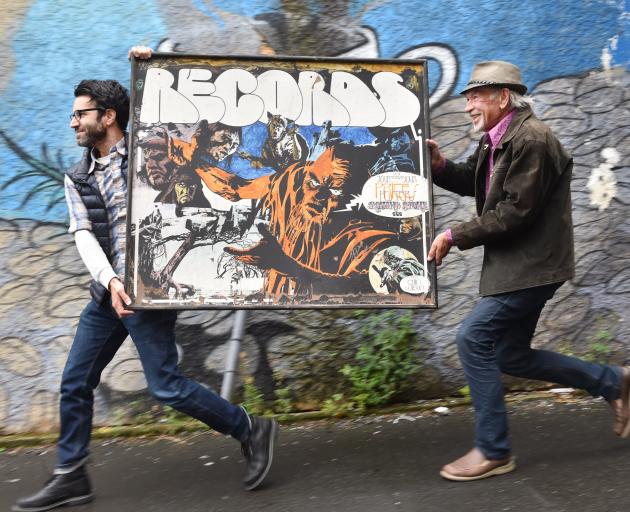 When Roy Colbert's Records Records shop opened in 1971 it did not have a proper sign. A piece of cardboard - the size of an album cover - was in a glass panel of the front door downstairs, telling people the record shop upstairs would be open by noon.

The shop in Stuart St helped shape the Dunedin Sound era of the early 1980s and was frequented by musicians from bands such as Bored Games, Sneaky Feelings, The Enemy, The Clean, The Chills and The Verlaines.

Colbert offered to clear Wilson's ''colossal'' tab at the store if the artist painted a sign for his shop.

Wilson moved overseas and created art for 2000 AD stories, such as Judge Dredd.

The sign survived stormy weather and was returned after being stolen in broad daylight by some Dunedin punk musicians.

Colbert sold the shop in 2005 and the sign lay in his basement ''wounded but still alive''.

''It was starting to fall apart, the frame had fallen off, it was split up the middle and paint had peeled off,'' Colbert said.

Former music fanzine Alley Oop editor Jeff Ruston repaired the sign - but ensured it kept its aged appearance - so it could adorn a wall at Robbie Burns Pub for the festival show Anything Can Happen: Strange Echoes of the Dunedin Sound for two nights from tomorrow.

After the two shows, the sign would be hung in Colbert's ''man cave''.

Posters advertising gigs in the 1980s by Dunedin Sound musicians were re-created by Logan Park High School pupils for display at the show.

Los Angeles-based music producer Adam Samuel Goldman travelled to Dunedin to get musicians together to collaborate for the two festival performances.

The Dunedin musicians range from high school pupils to ''artists who have been doing this for a while''.

The rumours are Carter and Phillipps will perform lost songs from the Dunedin Sound era.

Goldman commissioned karaoke versions of Dunedin Sound songs such as Death and the Maiden, by The Verlaines, Pink Frost, by The Chills and North by North, by The Bats.

The audience would be invited to sing the karaoke songs after the musicians' instruments had been packed away.

He hoped some of the original artists would sing over their own karaoke tracks, which were ''irreverent, respectful and also a little playful and stupid,'' Goldman said.