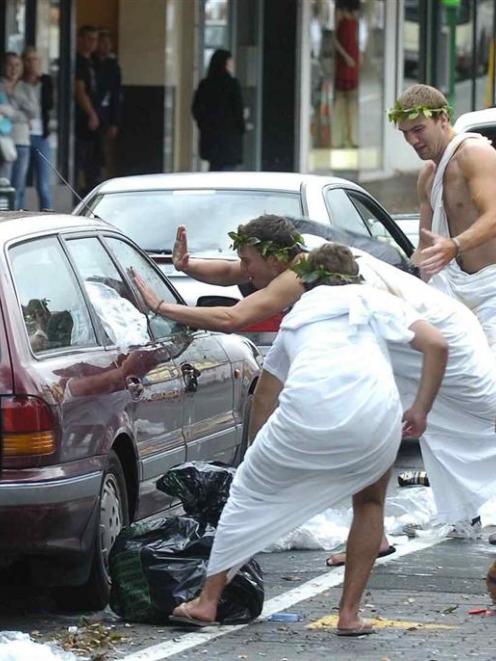 Scenes from Tuesday's toga parade which spiralled out of control. ODT files
A group of first-year university students who took part in Tuesday's toga parade say they tolerated violence from others during the event because they "thought it was the tradition and that it was exactly how it usually was".

The students, who moved into Dunedin's Arana Hall about two days before the parade, said they were appalled at the violence, but did not know until yesterday when they heard the news that what had happened was out of the ordinary.

One of the students, who identified herself as "Aranastudent" in comments on the Otago Daily Times online edition, later told the newspaper she was concerned people were blaming the damage on first-year students and "wanted to set the record straight for those who were in the toga parade and were simply victims of the violence".

"Sure, there were a lot of people in the parade causing destruction and behaving in a manner in which is certainly not acceptable . . . but most of the missiles were being thrown by second, third and fourth-year students lining George St's footpaths, alleys and roofs.

"It was clearly organised . . . This seems like the annual initiation for the 'freshers' to be hammered with the unthinkable."

A fellow Arana resident said new students were told the parade was a way for locals to welcome them to the city and that people would be there to cheer them on.

They had been told to expect eggs, water and flour would be thrown at them, but not bodily fluids and bottles.

An Arana student said she was appalled by how violent the parade was.

"It was utter chaos. We were running around the streets just trying to avoid being hit and injured."

Many of their friends were cut, grazed and bruised during the parade.

One girl from Arana had a large bruise where she was struck in the leg with a frozen orange, while another was in Dunedin Hospital after her tendon was "sliced" by a broken bottle.

The students hoped the toga parade would not be banned because of what happened.

"I think some ground rules need to be laid down for this event for it to be safe and enjoyable," Aranastudent said. "I mean, hey, who likes faeces thrown at you?"