Govt 'should urge' KiwiRail to tender 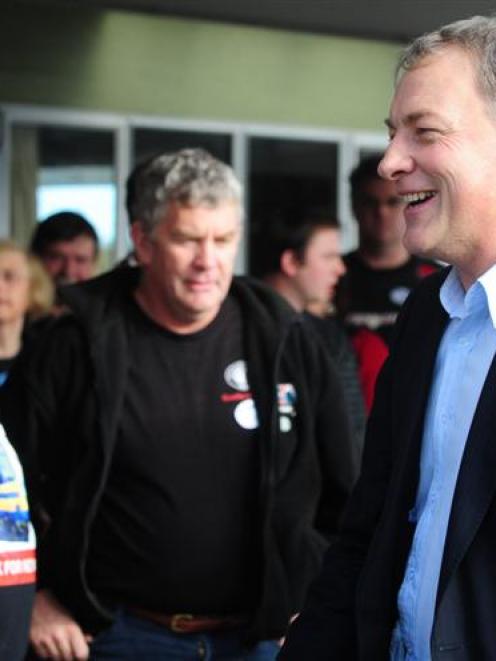 Labour Party leader Phil Goff (right) meets Hillside Workshops workers and delegates, including Rail and Maritime Transport Union national president Jim Kelly (at left ) and Les Ingram (centre) outside the party's southern South Island regional conference venue in Dunedin at the weekend. Photo by Craig Baxter.
The Government should be urging KiwiRail, including its Hillside workshops in Dunedin, to tender for a project to build $375 million worth of trains for Auckland, Labour leader Phil Goff says.

He noted that US President Barack Obama's motto was "yes, we can" but New Zealand Transport Minister Steven Joyce was taking the opposite approach by playing down efforts to have New Zealand workers build the trains.

Mr Goff was commenting in an impromptu address to several staff from the workshops and more than 50 other participants at a Labour Party southern South Island regional conference at Fairfield on Saturday.

As soon as he arrived, he spoke directly to Hillside staff and discussed issues linked to the Auckland trains project before giving his main address, which ranged more widely and discussed tax and environmental issues.

He had been to the Hillside workshops and seen for himself the quality of the work done there.

"We've seen a lot of jobs ripped out of this city."

If even some of the train work came to Dunedin "you're talking about millions of dollars and hundreds of jobs," he said in a later interview.

The Government should be encouraging KiwiRail to bid for the work.

Even if the KiwiRail workshops did not win the main contract, the Government should be making it clear that preference would be given to tenders that would have as much as possible of the work done in New Zealand.

A Berl Economics report commissioned by the Dunedin City Council and the Rail and Maritime Transport Union had highlighted the capacity of the Hillside workshops and showed big economic gains in getting much of the work done in New Zealand.