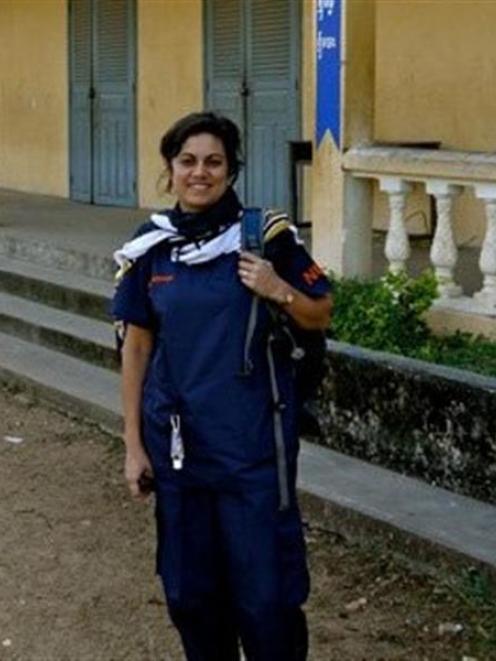 "Elated" by $250,000 scholarship. Photo supplied.
University of Otago medical graduate Dr Ayesha Verrall has gained a $250,000 scholarship to undertake research to help clarify why some people appear resistant to tuberculosis despite being heavily exposed.

Dr Verrall, who is a former Otago University Students' Association president, left New Zealand in 2010 and trained in tropical medicine in Singapore for 16 months.

She later spent two months in Peru, supported by the Federation of Graduate Women.

Dr Verrall has been living in New York for much of this year, undertaking bioethics study through another scholarship, from the Hastings Centre, an independent bioethics research institute at Garrison, New York.

She was "elated" to gain the $250,000 funding, provided over three years by the Health Research Council of New Zealand through a clinical research training fellowship, to support her planned PhD study.

Gaining the funds was exciting, because this research was "really important" and it had been "a long shot" applying to do research that would be conducted between New Zealand and Indonesia.

Many people who were exposed to Tb became infected with a latent form of the disease, but only about 10% of them developed active Tb later in life.

Another group of people apparently did not acquire the latent disease, despite being heavily exposed.

She hoped the research would begin to shed new light on possible genetic pathways which led some people with "innate immunity" to avoid acquiring even latent Tb.

Eradicating the overall disease would not be possible unless the reservoir of latent Tb could be dealt with, she said.

Her Indonesian research would be conducted in Bandung, the provincial capital of West Java, as part of an international scholarly collaboration, also including the University of Padjadjaran.

Dr Bridget Stocker, of the Malaghan Institute of Medical Research, Wellington; Dr Helen Fitzsimons, of Massey University; and Dr Fiona McBryde, of Auckland University, received Sir Charles Hercus Research Scholarships from the HRC, each amounting to $500,000, over four years; Angela Brenton-Rule, of AUT, also gained $250,000, and Clinical Practitioner Research Fellowships went to Dr Martin Than, of the Canterbury District Health Board, $713,273; and Dr Stewart Dalziel, of the Auckland District Health Board, $766,067.