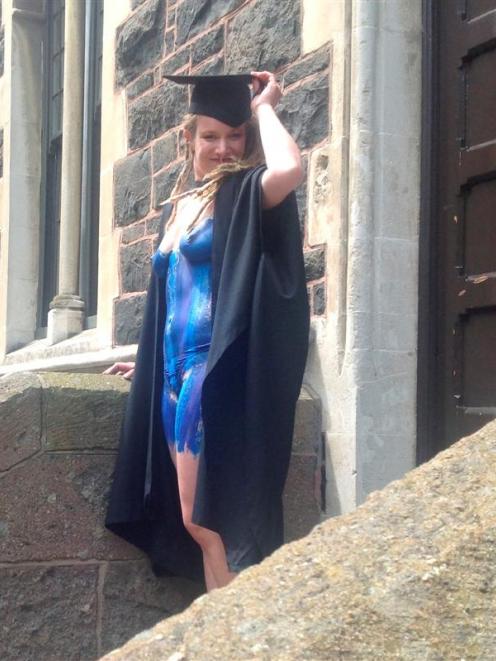 The 25-year-old walked across the Regent Theatre stage yesterday where she graduated with a BA and DipGrad (endorsed in music) wearing nothing but body paint, her mortar board, a graduation gown and a smile.

Miss Berg said she had been wanting to wear body paint at a public function since she saw the Air New Zealand advertisements in which the airline's staff wear nothing but a painted-on uniform.

The singer-songwriter in the Dunedin band Girl on Girl Action (GOGA) plans to shoot a music video for the band, also wearing body paint.

''We thought it would be a really good tester to see how many people noticed.

''It was about testing people's perceptions - trying to get them to open their eyes a bit.''

Surprisingly, she said few people noticed her attire - or lack of it.

''Not as many people noticed as you would think. Most of those who did notice, noticed my feet first.

''No-one said a thing at the graduation. Even my Mum said you wouldn't notice if you didn't look hard enough.''

She was comfortable in her outfit, until the paint started to flake off following the graduation.

''I was going `oh no', because I wanted it to be something that wasn't vulgar.

''So when it started to flake off, I decided it was time to pull the plug.

It was certainly a graduation to remember, she said.