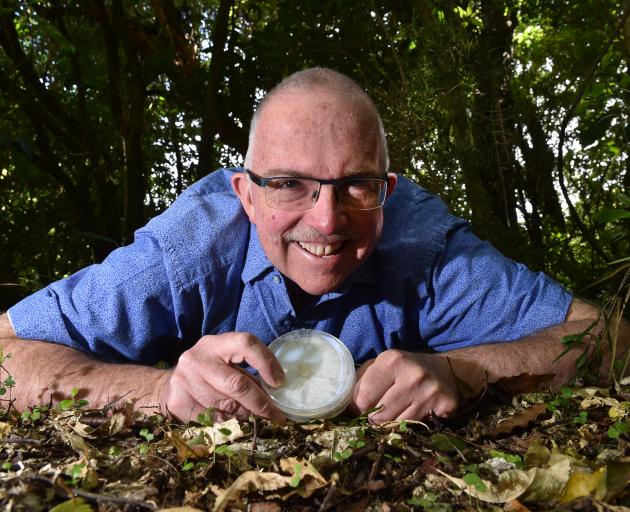 Associate Prof David Orlovich, of the University of Otago Department of Botany, brings part of his lab to the forest in Dunedin’s Woodhaugh Gardens. PHOTO: GREGOR RICHARDSON
Botanists in the field of fungi are celebrating their ability to further grow their research after receiving a Marsden Grant of nearly $1 million.

The University of Otago academics might be glimpsed hunting for truffles and mushrooms in the new year in forests around Dunedin, as they carry out a study of the life forms New Zealand's two million hectares of beech forest depend upon for survival.

Head of department Associate Prof David Orlovich has been awarded $960,000 to explore the genetic mechanisms giving rise to 12 species of fungi that can be found around New Zealand and Australia - a project he is working on with colleague Dr Tina Summerfield.

Different species of fungi allow beech trees, which are ectomycorrhizal, to grow far better than they would on their own. The growths absorb sugars, while the beech tree absorbs minerals from the fungus, which the growth transported from the surrounding soil.

When the fungi reproduce,they produce brightly-coloured truffles spread by animals and birds.

The Department of Conservation estimates New Zealand has about two million hectares of forest with almost nothing but beech trees, and another two million that contain different proportions of beech.

Though truffles can be found in many places around Dunedin, Prof Orlovich cautioned the public that not all types were edible.

Another researcher in the Department of Botany, Dr Matthew Larcombe, who works in the field of plant evolution, has also Fast-Start Grant of $100,000 per year for three years.

He said it would help facilitate important collaborations with scientists in Australia and Europe, and improve the quality of the science undertaken.