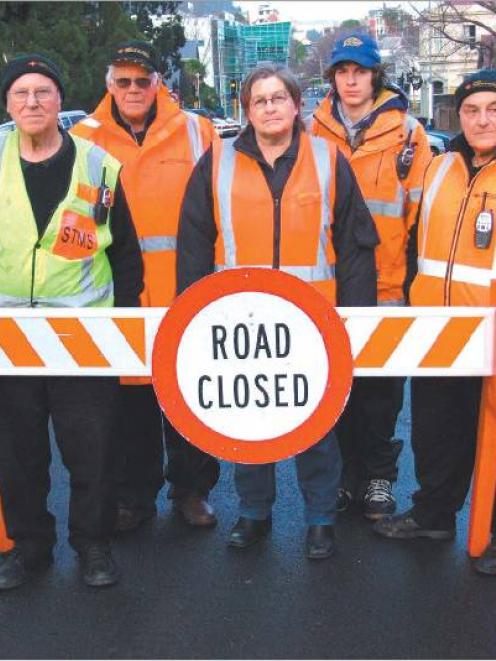 Hundreds of dollars worth of traffic cones and signs had been stolen by students this year, as they were every year, Arthur Driver, of Event Traffic Management Otago, said.

It made members of the small and ageing community organisation wonder whether they should continue to assist student events.

‘‘Why do we continue to volunteer for them?''

Otago University Student Association president Simon Wilson said community support for capping parades was appreciated and it was unlikely equipment was being stolen by graduating students.

City council events team leader Marilyn Anderson said it ‘‘stinks'' that equipment was being stolen from a small but valuable community group.

The Otago CB Radio Club, operating as Event Traffic Management Otago, carries out road closures and other traffic management activities for up to 100 city events each year.

‘‘It is done as a community service,'' Mr Driver said.

‘‘Almost all of the events are for community organisations so we only charge a nominal fee.

‘‘We've been told that without us half the events in Dunedin would fold because they couldn't afford to do it.''

The group puts in long hours and does not normally charge for labour.

This past weekend, during the rugby test and Cadbury Chocolate Carnival, members of the group operated in shifts to work from 5am on Friday to 10.30pm on Saturday, from 5am to 1pm on Sunday and from 6.30am to 3pm on Monday.

‘‘I have put out cones and straight away had to ask students walking off with them to put them back,'' Mr Driver said.

This year, at a North End street demonstration, the group lost equipment worth $600.

The last straw was this month, when a $150 sign was stolen while the group was providing traffic management for a children's school holiday programme at the Northern Oaks ground near the campus.

‘‘That job is now a write-off for us because of what they've taken,'' group member Bill Dwyer said. Most of the 10-strong group is retired. Their age, the group's small size and the thousands of dollars worth of equipment stolen made it difficult to keep going, Mr Driver said.

It was ‘‘entirely possible'' some events would not happen if the group ceased to function, Ms Anderson said.

‘‘It is a valuable service, particularly at a community level. ‘‘It's community helping community.'' It was unfair the group was being targeted for thefts when it had so few resources to replace equipment, she said.

‘‘That stinks - just because they think cones look cool in a flat. Do they have any idea what they cost?''

Mr Wilson said students should not steal road cones and traffic signs but said it was ‘‘not a problem that is limited to students''. Graduation parades were an important part of Dunedin's town/ gown tradition, he said.

‘‘We appreciate Dunedin's community support for the graduation parades. ‘‘There are 20,000 students here. I don't think it's those graduating who are stealing cones.''

Like to comment? Email star@alliedpress.co.nz or write to The Editor, The Star, PO Box 517, Dunedin. Please include your name and suburb, and note your comments may be published.